Fyrefox seems to be a juvenile delinquent, as he acts tough and can be rude at times. While NetBattling a rich person on a ship, he insults him multiple times and causes a commotion. He is also a pyromaniac, and loves fireworks, going far enough to steal the Booster program just to make new ones.

Fyrefox first appears on a ship NetBattling another individual. He defeats him and insults him. Later he shows himself as the one behind the scheme to steal the Booster System in order to make great fireworks. After his defeat, Fyrefox agrees to join Team ProtoMan in order to avoid being sent to prison. He participates in many Liberation Missions and becomes a valuable member of the team.

Fyrefox later participates in the attack on Nebula's base with the rest of Team ProtoMan. He and Raika assist Lan in opening the third security gate in the Nebula base. However, after the gate is opened, NapalmMan and SearchMan are both absorbed into the Dark Galaxy, forcing him to stay behind. Fyrefox later appears to root Lan on with Team ProtoMan when he tries to stop Dr. Regal. After the battle is over, he returns to his regular life.

Fyrefox gains control of Asteroid NapalmMan after his original NetNavi, Nenjiro, was deleted in a fireworks-related accident. He discovers an injured NapalmMan hiding in his PET, who he slowly nurses back to health and protects him from a criminal who wants to use him for crime. Out of gratitude, NapalmMan becomes Fyrefox's Navi and they later gain the ability to use Cross Fusion. Fyrefox calls NapalmMan, Nenjiro, in honor of his old Navi. He later joins the Cross Fusion Members, and helps battle against Duo and the Asteroid Navis. 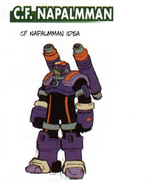 Concept art of C.F. NapalmMan.
Add a photo to this gallery

Retrieved from "https://megaman.fandom.com/wiki/Fyrefox?oldid=290120"
Community content is available under CC-BY-SA unless otherwise noted.