The Gaea Armor (ガイアアーマー, Gaia Āmā) is a heavy type armor available in Mega Man X5. It was built by Doctor Light for Mega Man X. For security reasons it's divided into four program segments. Once all four parts are gathered, the armor will be complete and become available.

The Gaea Armor focuses on power and defense, granting X complete immunity to spikes at all times, as well as mitigating the damage he receives. Additionally, X is surrounded by a green field which pushes back blocks with a tell-tale "V" on them when he dashes, and his grabbing strength is increased, allowing him to hang onto walls indefinitely without sliding.

However, in exchange for the strength that the armor offers, it has its own set of drawbacks. Due to the armor's weight, it has a notably slower running and dashing speed, cannot air dash, and relinquishes the use of any Special Weapons and Parts, being limited to its buster and Giga Attack.

The armor's buster functions differently from most others. Its shots dissipate after a moderate distance, but are notably stronger than normal buster shots and a fully charged shot can destroy certain enemy projectiles by shooting them. Its charge time is also much faster, completely omitting a half-charged shot. The Charge Shot is also capable of destroying the V Blocks. Its Giga Attack is extremely short in range, but also very powerful. When executed, X pulls his hands back and charges a large sphere of green and black energy, then thrusts it forward, severely damaging anything directly in front of him.

Note: Specific parts do not have individual effects as this armor can only be equipped when complete.

Dark Necrobat: This area can be reached even if no other armor is equipped. Drop down the pitfall next to the boss door, landing in a secret room. To reach the capsule, the player must guide an uncharged F-Laser through a small winding shaft so that it can hit the button on the other side of the wall blocking the way to the capsule.

Spiral Pegasus: In an open area with a small elevator that rises diagonally, use the Falcon Armor's flight ability to reach the high ledge where it is located.

It is possible to reach this armor part with Zero using the Jumper Part and getting the Virus status which turns him invincible for a brief moment, allowing him to walk over a platform covered in spikes. Zero needs to do a Dash Jump from this platform to reach the Capsule.

Burn Dinorex: On an open area with Batton Bones and a suspended rope that leads upwards to Mattrex's lair, the player must use the Falcon Armor or the Ride Armor to reach the far right side of the area.

Spike Rosered: The easiest way to get to this is with the Falcon Armor equipped, however while difficult it is possible to reach it with Zero using the Jumper Part. It is found above a pitfall area more than halfway through the stage. The player can reach this area by flying up into an opening with spikes on the walls.

Developer Comments
Once again, a ??? armor. (sweat) Finally, you could walk on top of the thorns. Once you make me crouch down on my heels, I've started my mad dash. (grin) Is it because the concept of X5 is a mad dash? (grin) I lie. In order to contrast it design-wise with the Falcon, I had it made with no projections and colored black. All sorts of ideas cropped up, like making the arms symmetrical, and I'm glad the design turned out as fantastic as it did. Actually, this will be the first armor the designer Sensei designed.[1][2]

Designer Comments
It was to look hard, heavy and strong, so I tried giving it a thudding, weighty feel. The chest is a point to note. I even tried making its color subdued, just using the vivid colors seen on armors to date as a point. This was to distinguish it from the other armors.[1][2] 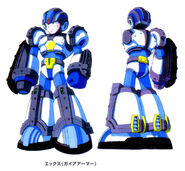 Concept art of the Gaea Armor for Mega Man X5.
Add a photo to this gallery

Retrieved from "https://megaman.fandom.com/wiki/Gaea_Armor?oldid=330542"
Community content is available under CC-BY-SA unless otherwise noted.