Gamma (ガンマ, Ganma) is the final boss from Mega Man 3, a giant robot constructed by Dr. Light and Dr. Wily before and during the events of the game for the purpose of peacekeeping and enforcement.

It was the lifelong dream of Dr. Light to create a giant robot to protect and serve world peace. During Gamma's construction, Dr. Wily feigned peacefulness, gaining Dr. Light's trust and assistance long enough to complete the robot. Dr. Wily's true intentions were to use the enormous creation as a weapon, furthering his evil plans for world domination. With their research almost complete, all that remained was to combine eight Energy Elements that were scattered about uncharted planets and bestow them to Gamma.

For unknown reasons, the robots sent by the doctors to mine the Energy Elements suddenly have gone crazy. With the robots protecting the elements, Gamma could not be completed, thus, when Mega Man learns about the incident, he and Rush set out to stop the robots and retrieve the energy elements.

When Mega Man returns to Dr. Light's Laboratory, he discovers that Dr. Wily stole Gamma on August 28[1] after receiving the last energy element to challenge Mega Man and Dr. Light once again, and Mega Man goes to the Wily Castle to stop him. After Gamma's defeat, the Wily Castle collapses with it inside.

Gamma is the final boss of Mega Man 3. In its first form, it has a small blue head that shoots from its mouth. The simplest way to defeat this form is to stand directly underneath the head and use Shadow Blade. Alternately, the head is also weak to Hard Knuckle. After destroying the small head, Wily completes Gamma's head and controls it, attacking with shots and punches. Gamma's second form is very vulnerable to Top Spin, and can be defeated in seconds by using it rapidly against Wily. If desiring more of a challenge, use the Search Snake.

Amount of damage in units that Gamma receives from each Special Weapon in Mega Man 3.

In the cartoon, Gamma is a giant yellow ball robot with blue details. He has a large smile and the peace symbol drawn on him, as Gamma was originally created for peace. It also has a cockpit in the top of his head, where Dr. Wily controls it.

In the manga, Gamma appeared in the story "Asteroid Blues", which is based on the events of Mega Man 3. Wily was taking out from jail to work with Dr. Light in Gamma's construction in a spaceship to be used against the robots protecting the eight energy crystals in asteroid Alpha, but Wily plans to use Gamma for himself. When Wily actives Gamma, the robot has no trouble against the asteroid's defenses, and Wily takes the debris from some of the alien robots to study them back on Earth, leaving Gamma on the asteroid to gather the energy elements for him. Mega Man attempts to stop Gamma in the asteroid, and before the fight Dr. Light reveals that he deliberately built Gamma with a weak spot due to not trusting Wily. Even with this knowledge, Mega Man has trouble against Gamma, but manages to defeat him with Proto Man's help.

Gamma also had a cameo appearance in the beginning of the story "Metal Heart" from Mega Man Megamix.

Gamma made a brief appearance in Mega Man Issue 20, Rock of Ages, when Mega Man was transported to the time of Mega Man 3. Mega Man's reaction to Gamma's presence implied that he had at least witnessed him before. Gamma was also briefly mentioned in Sonic the Hedgehog Issue 250, by Dr. Light, when noting the prior instances where Mega Man saved Wily from himself when his plans were a success, hinting that Gamma might have either betrayed him or otherwise gone completely out of his control. (When in reality, Gamma's defeat nearly caused Wily's death)

Gamma's first appearance in the main story is in Mega Man Issue 36, where Dr. Light reveals to Dr. Wily that he was working on Gamma, a robot big and powerful enough to handle any kind of global crisis and hazards, including earthquakes, tsunamis, and tornadoes. After completing the first line of Robot Masters, Gamma was his next big goal. He had a number of robots building the basic structure and he added the final touches. Days later, Gamma was completed and unveiled at Mega City's Titanium Park, but Wily's third generation of Robot Masters appeared and stole the eight Energy Elements from Gamma's mouth. Mega Man hunted down these Robot Masters one by one and recaptured the elements one by one, sending them back to Dr. Light, who had modified Gamma so that only he could reinstall them.

Unfortunately, Dr. Wily managed to complete and activate the Doc Robot and used it to threaten Dr. Light and Roll, with the former relenting and turning over Gamma to Wily. As Gamma requires Dr. Light's voice imprint and password to be activated, Wily prepares a cranial override and control device shaped like a red helmet in his castle to control Gamma (thus explaining the two different heads). Dr. Light then prepared Mega Man to go after Gamma, fearing that Wily would be unstoppable if he managed to gain control of it. Mega Man eventually managed to arrive at Gamma's hangar, and proceeded to disable the autonomous control unit just as Gamma was to activate its self defense systems. Unfortunately, Wily had already managed to complete his control device and proceeded to attach it to Gamma just as Mega Man disabled the original control unit.

He then attacked Mega Man with Gamma, prompting Mega Man to think back on his conversation with Dr. Light regarding the machine. Despite knowing that he would not be able to replace Gamma were it destroyed, Light had urged Mega Man to do so, and reasoned that it must have a weakness that could be exploited. He used the Time Stopper in an effort to locate a weak spot, but ran out of ammunition before he could locate it. However, after remembering his search for the Energy Elements, he determined that as they are the only thing powering Gamma, they would be its weakest point. Using this knowledge, he employed the Hard Knuckle to open its mouth and Search Snake to take the Energy Elements, (thus explaining its weakness to Snake Man's weapon) causing its mouth to explode and the giant mech collapse, Dr. Wily seemingly perishing in the process. Later, the X Corporation took over Wily's castle and retrieved Gamma's remain. 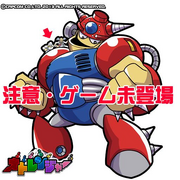 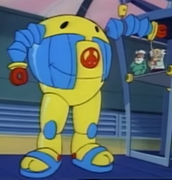 Gamma being built in Captain N: The Game Master.

Gamma under construction in Mega Man #36. 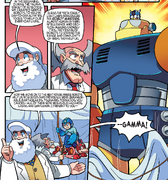 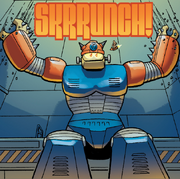 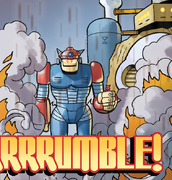 An early version of Gamma