Garakuta Robot (ガラクタロボット, Garakuta Robot lit. "Junk Robot") is an enemy that appears only in Mega Man X2, in Morph Moth's Junkyard stage and in the X-Hunter Stages. It's a robot that was built by combining scrap parts from Metall C-15s, a Gulpfer, a Dig Labour, and a Spiky. When attacking it, pieces of the enemy will break off, which will then fuse back to its body if the player does not defeat it quick enough. Using Silk Shot will defeat it instantly.

Garakita Robots are made up of Mavericks first seen in the original Mega Man X, which at the time was the only other X game released.

A Garakuta Robot appears in the Rockman X2 manga alongside Crash Roader, Tiranos, Cannon Driver, and other Maverick minions lined up ready for Zero. Anohter one appears at Morph Moth's junkyard, attacking X while he was exploring the place. 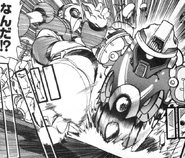 A Garakuta Robot in the Rockman X2 manga.
Add a photo to this gallery
Retrieved from "https://megaman.fandom.com/wiki/Garakuta_Robot?oldid=349139"
Community content is available under CC-BY-SA unless otherwise noted.