"Do not misunderstand me. It was an honor for them to have been chosen as experimental samples. It's as honorable as it gets for mean-spirited Reploids."
―Gareth, Mega Man Xtreme 2

Gareth (ガレス, Garesu) is one of the main antagonists of Mega Man Xtreme 2, dutifully serving his master Berkana as the Soul Erasers. Players battle him in the final stages when playing as Zero.

Gareth is a noble-looking Reploid whose silver-blue armor resembles that of a knight's. He possesses the large shoulderpads and visor of a proper knight, along with a long red cape. His weapons include a beam javelin and an energy shield he can project from his arm.

Gareth has a stoic and level-headed personality. He is the more sensible of the duo, helping to ground Berkana and her relentless ambition. However, he still has a ruthless streak, caring little for the Reploids whose DNA Souls he stole and even disrespecting their deaths. He is also quite arrogant, at first seeing himself as superior to X and Zero, but upon watching them further he comes to respect their power and even apologizes for not fighting them sooner.

Gareth is a Reploid created by Berkana to serve as her right-hand-man. Under her orders, he helped carry out her plan to steal Reploids' DNA Souls in order to create power-ups. This led to the incidents of Erasure occurring around the world.

Gareth first appears after X and Zero invade Laguz Island to investigate the wide-scale Erasure incident there. He introduces himself as a Soul Eraser who "erases the souls of evil Mavericks" and establishes himself as a dominant force on the island. When pushed by the two Hunters, Gareth forces them to battle Laguz Island's eight "guardian" Mavericks before they can meet further. Iris then discovers that Gareth's true goal has been erasing various Reploid's DNA Souls in order to create items to make himself stronger.

After X or Zero have defeated two of the Mavericks, he speaks with Berkana about their power, seeming to have underestimated their abilities and regretting doing so. Berkana reassures him that the Hunters are no match for the two of them and orders him to not intervene yet.

Once X and Zero defeat their respective four Mavericks, Gareth reappears to accept their challenge, inviting them to the Laguz Research Laboratory where he and Berkana reside. Upon their arrival, Berkana and Gareth split up to wait for the Hunters, forcing X and Zero to also split up. Zero goes after Gareth, who apologizes for not recognizing his strength from the start but also telling Zero that the Reploids whom he killed should be honored to have been "chosen as experimental samples." Zero destroys Gareth, and as X defeats Berkana, the DNA Souls the two Soul Erasers had stolen returned to the bodies of the various Reploids they'd once belonged to. This put an end to the Erasure crisis.

Gareth attacks by throwing javelins and defends with his shield. When he jumps above the screen, he will throw four javelins before he falls. He receives more damage when hit while throwing a javelin.

This unnamed lion is Gareth's companion that never appeared in-game. Despite this, the lion's head that makes up Sigma's Ride Armor (his second form) bears a striking resemblance. It is unknown if the lion can transform into a Ride Armor or if it is only based on it.

Gareth and his mistress were among the many Mavericks revived by Sigma-1 using the Genesis Portals during the Worlds Unite crossover event. They are dispatched to the world of Golden Axe to set an Unity Engine there. Gareth's lion is taken down by Gilius Thunderhead, while Gareth himself is defeated by Ax Battler. 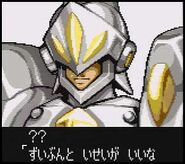 Gareth as he appears in-game.

Designer Comments
"The order details for Gareth were to make a 'knight and his lion.' Unfortunately, Gareth's lion does not make an appearance in the game itself. If the player could just assume that the lion loyally follows Gareth everywhere, but not in any way that is visually confirmable within the game, that would be great. (laughs)" -Haruki Suetsugu [2]