The area was originally used to revive nature with man-made mechaplants that can produce oxygen through photo-synthesis and absorb polluted air. After Epsilon's uprising, the area was abandoned and Professor Gaudile isolates himself in the area to use as his research laboratory. Being a pacifist, Gaudile refuses to help both the Rebellion Army and the Resistance.

After rescuing Nana, X, Spider and Steel Massimo go to the area to try convincing Gaudile to join the Resistance, while Dr. Psyche tries to make him join the Rebellion and Marino steals Gaudile's greatest creations, Cinnamon. Psyche goes after Marino and defeats her to take Cinnamon with him and make her help the Rebellion. When X's party meet Gaudile, he asks them to rescue Cinnamon. In the way, they find Marino unconscious and help her, and she agrees to join X's party to defeat Dr. Psyche. After Psyche's defeat, Marino, Cinnamon and Gaudile join the Resistance.

The Eternal Forest contains several paths that are divided in two parts, the path of the weak and the path of the strong, each protected by a Reploid that will challenge X's party to a set fight. The path of the weak is the shortest path to the exit and contains few battles against weak enemies, while the path of the strong is longer and contains stronger enemies. At the end of the forest, a Reploid will reward X's party with Tank Energy and, depending of the path, one healing item or Zenny. Some paths contain Item Boxes on them, which include Items, Sub Weapons, Figure Tokens, Spider's weapon Joker, and the Bone Key to activate the Dober Man for the Deployment Center. 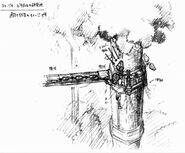