Gauss Magnus, known as Gauss Magnets (ガウス・マグネッツ, Gausu Magunettsu) in Japan, was the CEO of Gauss Inc. (ガウスコンツェルン, Gauss Inc. "Gauss Konzern" in Japan) who performed a variety of illegal activities, such as hijacking a plane. He first appears in Mega Man Battle Network 2 as the Gospel operator of MagnetMan.EXE. He is frequently mentioned by his daughter Tesla Magnus, the current operator of MagnetMan.

Gauss appears on the airplane Lan is riding back from Netopia and attempts to steal a program that was on it. Before battling he speaks briefly of his past, stating that he hates society because no one helped him when he was young. His family was poor, and his brother Jack (who is Count Zap) was taken in by a rich family, and later his parents became ill and died, leaving Gauss alone. He then started to work hard to become rich and get revenge on society. Afterwards, he joined Gospel to change that society. MegaMan has to fight his NetNavi, MagnetMan. After his defeat, Gauss is arrested after the entymologist discovered that he was behind the plot. Lan and MegaMan then witness him being escorted out of the airport by security (Gauss also weakly pleading for forgiveness), and felt some pity for him.

Gauss appears several times in the anime. His first appearance is during an episode where Higsby runs out of money and he offers him a job in his new office. Meanwhile, MagnetMan is robbing banks and transferring money to his account. But, Lan and Chaud defeat MagnetMan, and go after him. However, Gauss manages to escape in a flying machine.

Later in the series, he offers Maddy a job in Gospel which she accepts. It is shown that he is an avid admirer of Mr. Wily. His attempts to drown Lan, Maysa, Sal, and Miyu fail when Maddy turns against him.

Gauss appears in another episode where a chip containing Mr. Wily's mind is discovered. He goes to a deserted island to retrieve it, but meets opposition from the WWW. He then reveals that Count Zap is his brother and Zap pretends to join him, but later NetBattles him for the chip. Their airplane blows up though, and neither of them get the chip. Comically, both of them survive the ordeal (even after a heartfelt goodbye by Zap to the remaining WWW members) and continues to bicker while afloat on a glacier. He operates MagnetMan when Lan and his friends infiltrate the old WWW base, but MagnetMan is defeated by MegaMan with the help of ElecMan.

In episode 32, Gauss resurfaces and makes a deal with Nebula for Dark Chips through Ms. Yuri. However, he mistakes Ms. Mari for her instead, thus botching the deal once Lan and Commander Beef (Masa) show up. MagnetMan is once again defeated and Gauss is arrested.

In episode 9, he is freed from jail by his daughter, who takes MagnetMan from him for herself. He becomes the janitor for the Neo WWW. In episode 46, he attempts to rescue his daughter, with the help of Count Zap and several Cross Fusion members, from Dark Megaman.

He later becomes the matchmaker for Charlie and Tesla.

He appears in Episode 12, where he competes against Count Zap and Ann Zap for the family treasure. 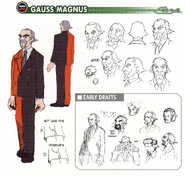 Concept art of Gauss Magnus.
Add a photo to this gallery

Retrieved from "https://megaman.fandom.com/wiki/Gauss_Magnus?oldid=292187"
Community content is available under CC-BY-SA unless otherwise noted.