"I've been waiting for you X! Kekeke. You seem to be having problems! I'll give you another problem to deal with!"
―Geemel, Mega Man Xtreme

Geemel (ギーメル, Gīmeru) is one of the Shadow Hunters from Mega Man Xtreme. He and his partner Zain worked to with Techno to hack the Maverick Hunters' Mother Computer system.

Geemel's design is evocative of a ninja, wielding a massive shuriken and a kite. His body is equipped with light armor to contrast Zain's heavy armor, and has a blue and white color scheme.

Geemel is a cunning and malicious Reploid. He is described as boisterous and obnoxious, but also skilled enough to back it up. He is very self-serving, and has a tendency to laugh with "ke" sounds. He is quite loyal to his partner Zain, but will not hesitate to abandon those he doesn't care for, such as Techno.

Geemel's past is a mystery, but he and his partner Zain are rumored to have been involved in several unsolved crimes over the years. The two Shadow Hunters initially resisted Sigma's call, not caring for his Maverick delusions of grandeur, but they were eventually forced to join his plan to work with Techno.[1]

In Normal Mode, Geemel is first seen speaking with Techno about X's progress against their Maverick data constructs. He wants to let X continue so they can watch him, but Techno wants to stop him before it's too late. Zain then volunteers to face X. After X destroys Zain in Sigma Stage 1 on the way to the Mother Computer's core, Geemel swears he will avenge him. Then, once X has defeated Sigma for the first time, Geemel realizes that his location is exposed to the Maverick Hunters, so he abandons Techno and flees.

In Hard Mode, Geemel returns to wreak further havoc on the Mother Computer, downloading a new group of Mavericks. X can encounter Geemel in a secret room in Wheel Gator's Dinosaur Tank Stage, but he escapes the encounter. Once X defeats all of the Mavericks, he faces Geemel on his way back to the core in Sigma Stage 1, where he once fought Zain. Although Geemel promises to avenge Zain, he is destroyed. In Extreme Mode, Geemel instead fights X right after he defeats Zain in the same stage.

With Geemel's data form deleted, he was unable to return to his physical body, and thus he remains retired.[2]

Geemel possesses ninja-like abilities, attacking with a large shuriken, teleporting, and riding a kite. As opposed to Zain's emphasis on brute strength, Geemel is focused on speed and agility. He is weak to Speed Burner.

Geemel was one of the many Mavericks revived by Sigma to form his army during Worlds Unite. He and Zain are sent to the world of Ghosts 'n Goblins, where they are burned to ashes by Astaroth. 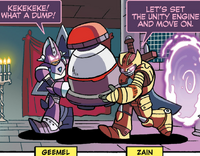 Designer Comments
"These designs [Geemel and Zain] were pretty simple. I just went straight off the instructions I got to make 'armor' characters. Zain is heavy plate, and Geemel is light plate. I did think they were a little too complex considering the Game Boy's graphical capacity, so I was totally blown away when I saw them come to life on that little screen! I can't say enough nice things about the masterful skills of the people who work the dots." - Haruki Suetsugu [3]