Gemini Spark (ジェミニ・スパーク, Jemini Supāku) is an antagonist in the first Mega Man Star Force. He is the result of the EM Wave Change between the FM-ian Gemini and the human Pat Sprigs and his other split personality, Rey. He is an extraterrestrial being from the Planet FM and along with several other FM-ian allies, was sent to Earth by the order of the FM king to retrieve the Andromeda Key.

Gemini Spark has a darkgreen skin color. The black one (Rey) has a golden right arm and the white one (Pat) has a golden left arm.

Later after Gemini is revived, he discovered Geo at the underground WAZA station and tried to stop him from going to space, while revealing that he can transform into both Gemini Sparks through memory data alone. Gemini Spark was about to destroy the machine that could send Mega Man to space, but fortunately, Pat's intervention allowed Mega Man to fight back and defeat Gemini Spark, and destroyed the lightning duo, with their last words asking Andromeda to avenge their death.

It's interesting to note that the memory data allowed Gemini Spark to split into two when Gemini himself had no mental disorder or another personality. However, it can be argued that he controlled both of them at once, making the battle more effective. Cepheus later revealed that Gemini was the one who tricked him into destroying the AM planet.

Gemini Spark shows up after completing the game at Whazzap Ruins, where Pat finally decides to reveal to Geo about Rey being his evil other personality. Geo can then fight Gemini Spark in an attempt to help Pat suppress Rey. This could possibly mean Gemini was resurrected by Cepheus.

In the Alternate Future, Gemini Spark IF appears to retain the original's personality and can be fought.

Gemini Spark does not appear as a boss in Mega Man Star Force 3. However, his Giga Card, Gemini Thunder, is obtainable through illegal data and Gemini Noise is an available Noise Change in the game.

In the anime, the "Rey" personality is absent. Pat is a willing ally of Gemini. While Pat remains the white Gemini Spark, Gemini himself takes control of the black Gemini Spark. Instead of being loyal to Cepheus, they both plan to overthrow him.

Gemini Spark was born when Pat agreed to help Gemini after he was hurt in a car accident. He first appears in the city, challenging Mega Man to a battle.

Pat and Gemini both planned to take the Andromeda Key for themselves, but to do that, they needed to get rid of whoever had it at the moment, which was Cygnus Wing (fused with Tom Dubius). However, the Andromeda Key broke while the rest of the FM-ians went on a rampage, and Geo and Omega-Xis (as Mega Man) stopped them with their new found power, Cygnus being destroyed in the process. The electric duo repaired it, but its energy has been completely depleted.

After failed attempts to fill the Key with negative energy, Pat and Gemini change into Gemini Spark and attack their own comrades. Gemini Spark Black first targeted Taurus and succeeded in destroying him and converting him to negative energy, then went to Wolf, Ophiucus, Libra, then Crown and Cancer with Pat/Gemini Spark White, although the latter escaped due to Crown's warning. After Mega Man defeated the Gemini Spark twins, Pat had revealed himself to Geo that he was Gemini Spark. He left with an ominous message of Earth's destruction, revealing that even with the incomplete key, it was enough to activate Andromeda, which they did at once.

Mega Man and Lyra Note went after Andromeda, which led them to Gemini Spark. They offered the duo to instead of fighting them, they can all join forces to take over the FM planet. Obviously, our heroes refused, which led Gemini Spark to attack the duo and sent them to the ocean floor. Fortunately, Cancer found the two heroes and woke up Mega Man, who went and found Andromeda and Gemini Spark in Japan. Gemini Spark ordered Andromeda to defeat Mega Man, which knocked him out. However, the three Satellite Admins used the last of their power to perform a suicide attack to destroy most of Andromeda, and Mega Man finished it off.

Gemini Spark is only shown as a Radio Wave Human and it is unknown if he has a human form. He is also only one being instead of two, with the white being his primary personality and black being another.

Gemini was abandoned by his parents on Crown Thunder's trash island many years ago. Crown took it to himself to raise the boy, teaching him his Elec attacks and Tuning techniques. One day, Gemini betrays Crown Thunder and escapes the island.

Gemini is first shown in the Wave Coliseum tournament as a front runner to win the Star Force. Throughout the 2nd round and a incident pulled pulled by a virus enemy, him and Rockman connect as rivals. When the two duke it out in the final round on a spaceship, Rockman wins by the factor of Gemini pushing more than he can handle. As Rockman was about make amends and claim the Star Force, Black Gemini arises and attacks Rockman. Detective Goyoda and Rockman keep trying to stop him, but ultimately the White Gemini pulled through and backfires a Gemini Thunder, which also destroys the spaceship. Rockman rescues White Gemini from falling debris and passes out. This gave Black Gemini a chance take the Star Force, he tells Rockman to find him if he wants the Star Force, and leaves.

Seeking for more Star Force, the FM King keeps sending his lackeys to claim Gemini's Star Force but they all fail. He continues to wait for Rockman.

Rockman finally finds and confronts Black Gemini and have an epic battle. Gemini underestimated Rockman and in near loss, he pulls out the Star Force and becomes a fusion of his two personalities. Stronger than before, he instantly knocks out Rockman. All of the sudden, FM King Andromeda himself finally finds Gemini and the two battle.

Losing and crying in desperation of his resolve, Gemini reveals he hasn't gotten over his parents abandoning him, and seeked more power to prove his existence's worth. Even with 1,000% Tuning boost and an accidental Brother Band Tuning with Rockman and Cancer Bubble, and pushing himself to the brink of death... Gemini is unable to even scratch the FM King, who reveals to has only been using 10%. Just as Gemini is about to try 10,000% Tuning, Rockman, worried Gemini will push himself too much again, knocks him out. Rockman takes the Star Force and chucks it far away as distraction and escapes with Gemini on his back.

Gemini is hospitalized while Rockman and his friends (Cancer Bubble, Ox Fire, Cygnus Wing, Crown Thunder, Libra Balance) try to fight Harp Note's fake FM King and the real FM King, who now has become full power. In the final chapter, Gemini reappears in his Star Force form, which is now powered by Brother Band Tuning energy instead of a Star Force. He protect Subaru to stall for him to become Rockman again. When Rockman pulls through again, he passes the Brother Band energy to him and comes out as Black Gemini. Rockman stops Andromeda and Gemini is relieved.

In the first game, only Gemini Spark Black can be damaged. In the second game, each of the Gemini Sparks have their own HP count as shown, and one still can fight on after the other is defeated. 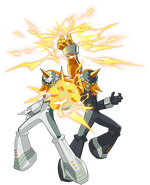 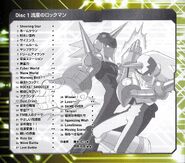 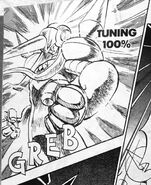