General Auriga, known as Auriga General (オリガ・ジェネラル, Origa Jeneraru) in Japan, is an EM Being in Mega Man Star Force 2 from the Alternate Dimension. He is the general of Apollo Flame's army of IF EM Beings.

After his defeat, unlike other EM Wave beings, he doesn't appear randomly like a virus in certain areas, but in the Alternate Dimension and challenges Mega Man to battles. He disappears when he loses, but will reappear after Mega Man waves out. 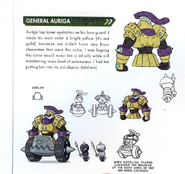