Genjibo (ゲンジーボ, Genjībo) is a "genji-botaru" firefly mechanism in Blast Hornet's stage from Mega Man X3. The Genjibo is not a confrontational enemy though; it just briefly appears to create the Shurikein, which X must fight.

Shurikein (シュリケイン, Shurikein) is the product of the Genjibo, and is the sub-boss of Blast Hornet's stage from Mega Man X3. Similar to Chop Register, Shurikein is a materialization of the Sigma Virus in the form of a shuriken.[1] Its movements are quite erratic, with its only form of attack is to collide with its opponent. Sometimes it will either roll back and forth, bounce (spinning in two different ways), or roll up the walls and along the ceiling of the room. Its weakness is the Acid Burst; using it will defeat it in six hits.

An easy way to defeat the Shurikein is to stick to the left wall until it stops spinning, then fire a few blasts and jump over it when it rolls towards the player. The player can blast it when it stops after doing this, as well. The Shurikein will only bounce at low health, or if the player shoots it while it is rolling back and forth.

Shurikein had a brief appearance in the Rockman X3 manga, where Zero defeated it while searching for Blast Hornet. 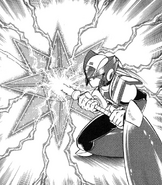 Retrieved from "https://megaman.fandom.com/wiki/Genjibo?oldid=294677"
Community content is available under CC-BY-SA unless otherwise noted.