Ghosts 'n Goblins, known as Makaimura (魔界村, Makaimura lit. "Demon World Village") in Japan, is a video game series by Capcom that mainly features the brave knight Arthur facing against several demons to save his beloved princess. Content from the series is present in some Mega Man games.

Shade Man's stage is a homage to the game Super Ghouls 'n Ghosts for the SNES, having some resemblance to the first stage. Also, a special Easter Egg occurs when the player holds down the "B" button while selecting his stage and continues to hold it until the stage begins. The music of the stage selected screen and the stage changes to the map screen music and main theme from the Ghosts 'n Goblins series. However, this only works before Shade Man is defeated.

Similar to Mega Man 7, the main theme from Ghosts 'n Goblins may play when fighting against Shade Man.

The Construction mode has a DLC Scenery Pack named Ghosts n' Goblins Special that is based on the series. Also, one of Roll's costumes is a knight armor similar to Arthur's.

When Ultimate Ghosts 'n Goblins was released, a DLC stage named [With U_G_Goblins] was released for Fire Man.

Arthur was planned to appear as a playable character in this cancelled game. 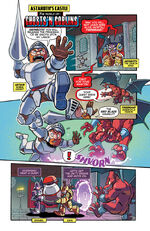 Arthur, Astaroth, and Firebrand appear in the crossover Worlds Unite. In it, Arthur and Astaroth alongside the latter's right hand Firebrand prepare to duel, only to be interrupted by the opening of a Genesis Portal, with Shadow Hunters Zain and Geemel emerging with the Unity Engine. Arthur, mistaking them for knights, requests their assistance in stopping Astaroth, only for Zain to blast his armor off. Bunnie Rabbot and Zero then emerge and fight them. Astaroth then expresses annoyance and confusion at the events, with Bunnie Rabbot explaining that Sigma is about to steal their world's energy via those robots. After the two Mavericks are pulverized, the dark lord proceeds to call a truce to deal with Sigma, and sends Firebrand to ally with Arthur.

Retrieved from "https://megaman.fandom.com/wiki/Ghosts_%27n_Goblins?oldid=323018"
Community content is available under CC-BY-SA unless otherwise noted.