The Giga Attack (ギガアタック, Giga Attack) is a powerful attack that can be used by X's armors. The most common version is the Giga Crash (ギガクラッシュ, Giga Crash also called Giga Crush), a full-screen attack that damages or destroys all enemies seen on-screen. It first appeared in Mega Man X2 as the ability of the armor's body part, and appeared in all subsequent games after Mega Man X3.

The Giga Attack is not limited to X, however. Zero can also use his own versions of Giga Attack, as techniques learned from defeated bosses from Mega Man X4 onwards (and Mega Man Xtreme 2). His versions of the attack more closely resemble the original incarnations performed by some of X's armors. 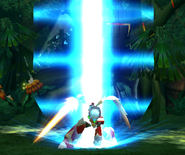 Zero's X8 Giga Attack.
Add a photo to this gallery

Retrieved from "https://megaman.fandom.com/wiki/Giga_Attack?oldid=312442"
Community content is available under CC-BY-SA unless otherwise noted.