The Gigantic Mechaniloid CF-0 (超巨大メカニロイドＣＦ－０, Chō Kyodai Mekaniroido CF-0, "Super Gigantic Mechaniloid CF-0") is the boss of the Opening Stage from Mega Man X2, a gigantic Mechaniloid that has great power, but low speed due to its size and weight. The X-Hunters gave orders to mass-produce CF-0 and use them as an army to conquer cities around the world. The Maverick Hunters discovered that the abandoned factory the CF-0s were being manufactured in was being used by Mavericks and attacked the factory. Several inactive CF-0s can be seen in the factory, but only one was complete at the time, which fights against X.

CF-0 walks and jumps around the room, sometimes attacking X with punches. The only parts that cause damage to X are the head, arms and feet, being possible to pass through his body without receiving damage. CF-0 can only be damaged by attacking the head.

Gigantic Mechaniloid CF-0 also appeared as the sub-boss of the Factory Stage in Rockman X DiVE. Its behavior is similar to the original, but as it appears in an area with molten metal, its jumps causes fireballs to fall on the area. It also gained a spinning attack.

Gigantic Mechaniloid CF-0 Jealous-type, known as Gigantic Netamiroid WD-B (超巨大ネタミロイドWD-B, Chō Kyodai Netamiroido WD-B, "Super Gigantic Jealousloid WD-B") in Japan, is a variation that appeared as the boss of the White Day event stage "Re-taking Candy Factory" from Rockman X DiVE. Its behavior is the same as the normal version, but when it jumps, it drops hot chocolate balls and splashes some chocolate on the screen, slightly reducing the player's vision.

CF-0 has a short appearance in the first chapter of the Rockman X2 manga, where he attacks X with punches and kicks in a Maverick factory. He was defeated with two charged shots on his head, exploding afterwards. 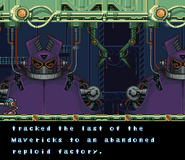 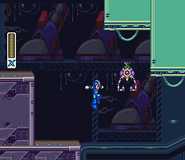 CF-0 parts in Mega Man Xtreme 2 when playing as X. 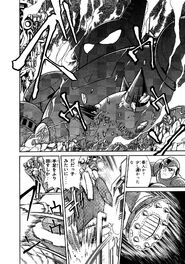 Retrieved from "https://megaman.fandom.com/wiki/Gigantic_Mechaniloid_CF-0?oldid=351896"
Community content is available under CC-BY-SA unless otherwise noted.