Gilliam Knight (ギリアムナイト, Giriamu Naito) is a knight-like robot in Mega Man 7 that is native to Shade Man's stage. While indoors, or when the moon is obscured, it is a knight on a unicycle wheel. Under the full moon, it turns into a wolf. This is not only a nod to werewolf legends, but when in wolf form, the Gilliam Knight strongly resembles the Weredog from Super Ghouls 'n Ghosts, which will lunge at the player.

Gilliam Knights are tougher in their wolf form compared to in their knight form. In knight form, the Gilliam Knight is easily dispatched, but upon transforming to a wolf, it becomes dramatically tougher and considerably more dangerous.

In Mega Man Gigamix it is no different in appearance than its game counterpart other than the addition of a few bolts and different pupils in its wolf form which give it a very feral, threatening, and all-around vicious appearance. They appear during the Battle & Chase. 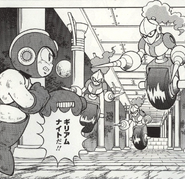 Gilliam Knight in the Rockman 7 manga.

Gilliam Knight in the Rockman 7 manga.