Glacier le Cactank (グラチャー・レ・カクタンク, Gurachā re Kakutanku) is one of the bosses of Mega Man Zero 3. Based on cacti, he is one of the Eight Gentle Judges that was brainwashed by Dr. Weil to work for him, as one of Weil's Numbers. Cactank used to be a fair, kindhearted judge that would be willing to look the other way on trivial matters, but when Weil corrupted him, his personality afterwards became that of a very cruel courtroom judge who issues the death sentence to even the smallest of offences. Originally, he was built as a large armored water tank that he used to bring water to remote areas, and has a cooling system that allows him to freeze the water inside him to use it as ice thorns.

When Zero goes to the Snowy Plains to reinforce the Resistance scouts to recover a container that fell from Omega's spaceship, Cactank appears and says it belongs to Neo Arcadia. Calling Zero a thief, he says he will punish him with death and fights against him. After losing, he reappears in the final stage, saying that Zero is invading the local and sentences him to death again. He dies after fighting against Zero.

Cactank makes a cameo appearance in Mega Man Zero 4 as one of Dr. Weil's first form attacks, where an image of him appears and tries to smash Zero.

Cactank attacks by throwing six (two at a time) small icicles at Zero while hanging on the ceiling with his other hand, throwing his arms at full length and then slowly dragging them back towards himself and by clinging to the ceiling to try and land on Zero. At rank A or S, he uses the attack Ice Carnival, where he spins one of his arms to launch icicles in all directions. The ice hanging from the ceiling in his room also adds to the difficulty of dodging his attacks. Defeating him gives Zero the "Spike" Foot Chip, and if the player is at A or S rank, the Orbit Shield EX Skill. 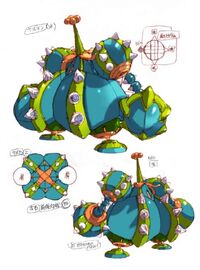 Concept art of Glacier le Cactank.
Add a photo to this gallery
Retrieved from "https://megaman.fandom.com/wiki/Glacier_le_Cactank?oldid=284103"
Community content is available under CC-BY-SA unless otherwise noted.