Glyde (グライド, Guraido) is a character from the Mega Man Legends series. He is the second in command in the Loath Family and debt collector for Lex Loath, and later appears as the leader of his own personal pirate armada. He was originally an enemy of the Bonne family in The Misadventures of Tron Bonne, and later a begrudging ally of theirs in Mega Man Legends 2. Similar to Tron and her Servbots, Glyde is frequently accompanied by his Birdbots. Glyde is effeminate, arrogant, snobbish and narcissistic, yet he demonstrates high intelligence and skill as a pilot.

Glyde was the one responsible for capturing Teisel and Bon Bonne in Nakkai Desert and forcing them to pay off their debt to Mr. Loath. Apparently Loath loaned huge amounts of money to many people then made them pay off their debts (and interest on the debts), and those who could not pay were forced to work off their debts. Teisel's debt to the Loath family was 1,000,000 Zenny. Tron took it upon herself to steal 1,000,000 zenny and bail her brothers out from Loath's grip.

She then learns that she needs 2,000,000 zenny to bail them out (due to the interest), but after obtaining the money, Loath tells her that she owes interest on the interest. He then orders Glyde to take her away. After throwing her in a cell, Glyde returns and talks to Loath, who reveals that he has plans to conquer the world. Tron eventually reunites with her brothers who tell her that Loath is planning to locate the "Colossus", an ancient treasure whose power is strong enough to take over the world. The Bonne family eventually escape from their prison, however Glyde returns with his battle robot and engages Tron in battle. Glyde does lose, however the Colossus awakens immediately afterwards. Glyde boards the Colossus with Loath and prepares to attack the Bonnes, causing large damage to the Gesellschaft. After a fierce battle, where the Servbots themselves have to fight against the Colossus, the Colossus is defeated and Glyde and Loath are turned over to the Ryship Island Police, where they are the most wanted criminals and Denise receives the credit for capturing them.

In this game, Glyde pilots an odd mech double the size of the Gustaff called Rafale. It resembles a bird, and can swap between aerial movement and bipedal movement. The machine is equipped with several lasers and electrical generators which can be fired from the hands of the robot or the mouth, and also carries an energy saber about the length of the machine housed into the arms of it. The machine is fought twice, first after the introduction stage in the desert, and again in the Colossus's crypt.

Glyde returns in the beginning of Mega Man Legends 2, partnered with the Bonnes, Bola and Klaymoor to retrieve the keys to the Mother Lode. Neither Teisel nor Glyde are particularly fond of their partnership, with Glyde harassing Teisel about the latter's failed attempts to leave pirating behind.

Glyde's primary involvement is during the events of Nino Island when he attempts to have his Birdbots take over the island. After being thwarted by Mega Man, his forces retreat to Calbania Island which is later blown up in a failed attempt to defeat Mega Man. In a last attempt, Glyde brings in his airship King Glydon to attack Nino Island himself, but is defeated by the combined efforts of Mega Man and Roll, the island's Parabola Gun causing everyone inside the airship to fall into involuntary hysteria, resulting in the ship's destruction.

During the final attempt to stop Mega Man near Yosyonke City, both Teisel and Glyde attempt to blow Mega Man up with their armed train, the Gemeinschaft. After Glyde's section is damaged beyond use, Teisel happily disconnects Glyde's car, leaving Glyde to swear revenge as his car explodes, thus ending their partnership. Glyde's status after the battle is unknown.

Glyde in The Misadventures of Tron Bonne 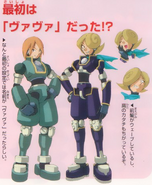 Concept art from The Misadventures of Tron Bonne

Retrieved from "https://megaman.fandom.com/wiki/Glyde?oldid=348158"
Community content is available under CC-BY-SA unless otherwise noted.