Goblin (ゴブリン, Goburin), also known as Air Tikki in the Mega Man 2 instruction manual for the U.S., is an indestructible giant goblin head that appears in Air Man's stage. Its horns lift slowly and periodically to damage enemies, and if an enemy stays on its head, it will use small versions of itself (Petit Goblin, see below) to remove them. It was originally used as the leader of a robot circus.[1] The Time Stopper is a good weapon to use on it, as it will prevent its horns from rising and it won't release Petit Goblins, making passage across them easier.

Petit Goblin (プチゴブリン, Puchi Goburin), also known as Gremlin in the Mega Man 2 instruction manual for the U.S., is a small Goblin that appears from the ears of a Goblin when an enemy stands on its head. They are a good way to win items, if the player stays on the head of the Goblin using Leaf Shield. It is called "Puti Goblin" in Mega Man II.

Goblin and Petit Goblin had a short appeareance in issues 10 and 11 of the Mega Man comic series by Archie Comics, in Mega Man Megamix, Rockman: Dr. Wily no Inbou, and the Rockman World 2 manga. They also make an appearance in The Wizard, where they are encountered by Jimmy, who is playing Mega Man 2 in preparation for the video game tournament. 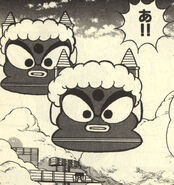 Goblins and Peti Goblins with the Lighting Lords and Fan Fiends in the Archie Comics.

Petit Goblins fighting against Mega Man alongside Air Man and his Lightning Lords.

Goblins and Petit Goblins in The Wizard.
Add a photo to this gallery

Retrieved from "https://megaman.fandom.com/wiki/Goblin?oldid=331910"
Community content is available under CC-BY-SA unless otherwise noted.