"Take a look at these new upgrades!"
―Bit and Byte before the combination, Mega Man X3

Godkarmachine O Inary (ゴッドカルマシーン・Ｏ・イナリー, Goddokarumashīn O Inarī) is a super Reploid formed when Bit and Byte combine, which they can achieve after being upgraded by Dr. Doppler following their failure to capture X. This Buddharupa-like Reploid combines the swordsmanship of Bit with the hand-to-hand combat of Byte, greatly enhancing the Nightmare Police. Despite having a quadrupedal build, Godkarmachine O Inary is slower than their separated forms due to having a larger body.

If X didn't destroy either or both Bit and Byte in the eight stages, he will face Godkarmachine O Inary in Doppler Stage A. Despite being a combination, if X destroyed only one of them, Godkarmachine O Inary will still be wholly formed by the remaining member regardless of the missing half, the survivor using the form to avenge his fallen ally. If both of them were destroyed with their weaknesses, X will face Press Disposer instead.

Godkarmachine O Inary is stationary, only briefly rising above the ground without leaving its position. If X is in in a high area, Godkarmachine will hover to attack with his saber shockwave, and if X moves below him he will be crushed. If X moves behind him, he will release homing spheres from his hands. His weakness is the Ray Splasher, but he's only vulnerable in the upper yellow half of his body.

Displays the amount of damage in units that Godkarmachine O Inary will receive from each Special Weapon in Mega Man X3.

After Bit's defeat, Byte asks Doppler for assistance. Instead, Doppler uses his dragon to attack X with a powerful blast, with both Bit and Byte caught in the attack range. X and Marty manage to avoid the attack, but Bit and Byte suffer intense damage. As a barely-alive Byte, carrying the seemingly-dead Bit in his arms, begs his master to not abandon them, Doppler decides to combine them, the dragon releasing several Worms from its mouth to merge with them so they continue serving Doppler as an experimental tool. While the Worms fall over and combine with them, Byte protests by saying that he isn't just a tool and wants to continue being himself.

As Godkarmachine O Inary, the power of the Nightmare Police skyrockets, but their attacks have no effect on X, as he had recently obtained a powerful armor. X manages to destroy both Godkarmachine O Inary and Doppler's dragon with one charged shot. The remaining Worms from Godkarmachine O Inary merge into a giant two-headed worm-like monster as a last attempt to defeat X, but the monstrosity collapses before it can even touch him. 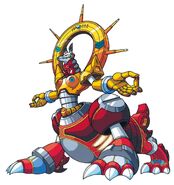 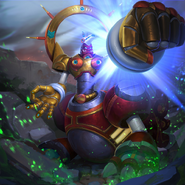 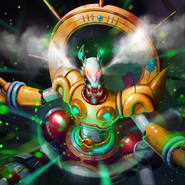 In the TEPPEN card Fusion.