In Mega Man Legends 2, Gorubesshu also fires attacks that can cause status changes to MegaMan Volnutt such as burns and temporarily disabling the Mega Buster. MegaMan can pick up and throw them with the Lifter.

Gorubesshu also appeared in the mobile game Rockman DASH: 5tsu no Shima no Daibouken! and in the crossover Namco × Capcom. 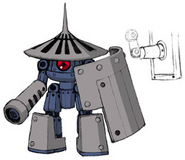 Concept art from Mega Man Legends 2.
Add a photo to this gallery

"Gorubesshu's popularity in both Devrooms was overwhelming!

In the future, I'd like to preserve this guy's shield strategy while adding in some new special attack (fights with Gorubesshu tend to be a little slow, so it'd be nice to add some excitement).

I was thinking it might be good to have him thrust at you with his shield up, sending you flying back, but that kind of movement would actually expose this character's big weak point, so that might be a problem. I'll think of something else.

I also plan to have different versions of this enemy. Gold-colored Gorubesshus will be able to deflect attacks from even the strongest special weapons! I think that might be pretty cool" --Tomohiro Shingu

"This guy was created alongside Sharukurusu to be one of the tougher enemies in the game, and I think it met that aim. It also appeared in "Namco x Capcom", and now it's back for Legends 3. I guess you just can't do without this enemy!" --Yuji Ishihara

Retrieved from "https://megaman.fandom.com/wiki/Gorubesshu?oldid=339474"
Community content is available under CC-BY-SA unless otherwise noted.