Gospel (ゴスペル, Gosuperu) is the name given to the beast-like super Multibug Organism (きゅうきょくのバグゆうごうたい, kyūkyoku no bagu yūgōtai, "ultimate bug fusion") that is the final boss of Mega Man Battle Network 2.

It is the failed result of cloning Bass by Sean Obihiro. Gospel later reappears and powers up Bass into Bass GS in Mega Man Battle Network 3.

The Multibug Organism was created by accident when Sean Obihiro, the leader of the criminal organization known as Gospel, allocated 200% server power to the bug fusion process in an attempt to create another copy of the SuperNavi Bass. The copy Bass then exhibited critical bugs, and became a large, black, wolf-like monster strewn with bugs all over its body. The organism then drove the server power to over 600% of its own accord and almost destroyed the Net, before being deleted by Lan Hikari and MegaMan. It has 2000 HP, and can only be damaged by non-breaking attacks when its mouth is open or by attacking the simulacra of AirMan, QuickMan, and CutMan that it summons as part of its attacks.

In the ending of the game, after Bass was swallowed by Alpha, Gospel discovers him. Sensing that the organism wished to help him, he merged with it. This allowed him to become the powerful Bass GS, eventually challenging MegaMan again. MegaMan, however, defeated him once more. Bass GS has 2000 HP and a Life Aura of 200, and uses a number of new attacks acquired from Gospel's power. However, the incident lead to an accidental and temporary erasure of Bass's memory.

Gospel appears as a secret boss after the game is completed for the second time.

In the second season of the anime, Wily operates the NetMafia Grave behind the scenes and creates the anime's incarnation of Gospel, which was called the Grave VirusBeast in the MegaMan NT Warrior dub. Grave made the VirusBeast absorb AirMan, and the beast heads for NetCity, where it starts to absorb NetNavis. It attacks MegaMan and company while NetBattling at the stadium. ThunderMan tries to stop it, but is absorbed. MegaMan is also almost absorbed, when Bass appears and after a tense moment the beast leaves without touching Bass, who comments that the creature knows who he is. This suggests that even though the beast is mindless, a part of it remembers Bass as being a part of itself and therefore will not attack him. Dr. Wily then reveals himself as the leader of Grave and the creator of Bass and the VirusBeast; he states that they were both formed from PharaohMan's remains, however, only Bass is the one with PharaohMan's soul. Bass then appears to absorb PharaohMan's other remains, and succeeds in defeating the VirusBeast and absorbing all of its data. However, the beast is too much for him, as his data degenerates and reforms into the beast. The beast then continues its rampage and absorbs buildings and Navis in the Net.

ProtoMan, SharkMan, SkullMan, and WoodMan are all absorbed fighting it, while all the other Navis have evacuated the Net. Meanwhile, MegaMan is completely contaminated by Bass' bugs, and uncontrollably Style Changes into a powerful and destructive Bug Style. He attacks the VirusBeast, and although it seemed like the beast is winning, data from inside the beast starts leaking out and breaking apart, and then gets absorbed by MegaMan. The VirusBeast is then totally destroyed and absorbed by MegaMan, but MegaMan doesn't stop his rampage, absorbing all of his surroundings. Unsuccessfully, Lan tries to get through to him, but MegaMan continues, until the last moment, when all seems lost and destroyed, all the data flows back to normal. MegaMan is back and so are all the other absorbed Navis. All is restored, except the VirusBeast, which was permanently deleted.

After CutMan, QuickMan, MagnetMan and FreezeMan were defeated by MegaMan and ProtoMan, their remains combined into the Grave VirusBeast. Grave teamed up with Bass to attack MegaMan on the Queen Ocean ferry, but was destroyed and absorbed by Bass after attempting to claim MegaMan's Hub Style powers. A battle between the two NetNavis soon turned to Bass' favor, and he nearly succeeded in destroying MegaMan until MegaMan turned all his Hub Style power against him. Later, upon being reborn as Bass GS, Bass manifests Grave's head to launch devastating attacks.

The beast appeared in the manga.

Gospel is physically invulnerable when still and it is damageable only when it actually attacks its enemy, as its open mouth is its weak point.

While there are no Gospel Battle Chips that can be obtained by normal means in Mega Man Battle Network 2, four Battle Chips were available in an event held in Japan. Those Battle Chips can be combined with Bass V3 X and Anti Navi X to form the Program Advance Darkness, known as Dark Messiah (ダークメシア, Dāku Meshia) in Japan, which summons Gospel to attack enemies with its breath, followed by Bass attacking with Earth Break. This Program Advance also appears in Mega Man Battle Network 6, but instead of summoning Gospel, it makes Gospel's head appear on MegaMan's arm to burn enemies 7 squares ahead with Gospel Breath. Then Bass comes, slashing 6 squares front with a Bug Rise Sword.

Gospel is designed after the classic Mega Man series character, Gospel (Treble in English), the Rush to the original Bass. It is unknown why the Japanese name Gospel was used for the Beast and organization, though it may be because Treble doesn't sound very intimidating. Another possibility is that for some reason, the localization team could not or did not want to change Gospel's logo, which is clearly in the shape of a G.

The Cybeast Gregar of Mega Man Battle Network 6 was designed to resemble Gospel.[3] When confronted in his office by Lan, Mayor Cain states that Gregar formed long ago through an accumulation of Bug Frags, citing Gospel's creation as a similarity for reference. Thus, in-universe, it is Gregar that predates Gospel. It can be presumed that their similarity in appearance is due to the fact they both were made from bugs.[4]

It can be inferred from Cain's story that Gospel's relatively bland appearance (a smaller, Gregar-shaped Bug Frag from an in-universe perspective) and inferior stats are the results of the bug fusion being forced, having been induced manually instead of occurring naturally, as was the case for Gregar. 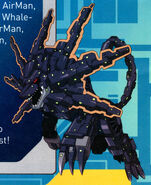