The Government Complex (官庁街, Kanchougai), as its name suggests, is a large government run facility in Den City that appears in the first Mega Man Battle Network game. The building houses two businesses; Waterworks and SciLab. Sal and Masa have food stands outside the building.

Waterworks (水道局, Waterworks) is the water purification and distribution center for Den City. During Mega Man Battle Network, the WWW takes over the water control systems and Den City's water supply is completely shut down (and all beverages from vending machines and stores were suspiciously all bought). Lan and MegaMan head to Waterworks where they make their complaint and soon meet their series rivals Chaud and ProtoMan.

After being brushed off and tolded that the officials are "handling it" Lan decides to take matters into his own hands. Lan and MegaMan find a hiding place up in Yuichiro Hikari's office in SciLab and wait until all the employees leave the building. MegaMan and Lan navigate the cyberworld of Waterworks and destroys the virus blocking the water flow. Lan quickly runs to ACDC Elementary's fountain and discovers discolored purple water in the pond. Suddenly Lan receives a phone call from Chaud saying that people all over town are getting very sick from drinking the water. He also scolds Lan and tells him that ProtoMan will delete MegaMan if they ever get in the way again. Feeling a need to fix his mistake and to prove Chaud wrong, Lan jacks in MegaMan and he ventures further into the Waterworks Comp where he encounters IceMan. After defeating IceMan, IceMan defrosts the purification system and Den City's water returns to normal.

SciLab is a large and famous scientific workplace. It is a huge complex with cutting edge technology. Many important creations were developed in SciLab, like the NetNavis (including MegaMan) and PETs. It is the workplace of Yuichiro Hikari, Lan's father. Lan visits Yuichiro many times during Mega Man Battle Network.

A Restaurant (レストラン, Restaurant) in the Government Complex located 30 floors underground, being surrounded by water. Scientist from SciLab and their families, including Lan and Haruka, get invited to a dinner at the restaurant, which has PETs on display recycled from plastic bottles. When Lan's father leaves the restaurant, Count Zap appears and cuts the power supply of the building, making the elevator unusable and causing the oxygen supply in the party room to begin running out. Lan and MegaMan leave the restaurant by way of the dust chute and get down into the power plant.

The Power Plant (発電所, Power Plant) is the Government Complex's source of energy, and also supplies energy to Den City. After leaving the restaurant by the dust chute, Lan and MegaMan jack into the power plant's main computer system. MegaMan navigates the power plant's cyberworld's extensive maze until finally reaching the Navi behind the shut down; ElecMan.EXE. MegaMan and ElecMan battle but MegaMan soon realizes that ElecMan uses the power plants shorted electricity to heal any damage he takes. As a solution, Lan sprints to the plants power switch and is able to shut down the entire plant's energy. MegaMan quickly deletes ElecMan when ProtoMan suddenly arrives. ProtoMan wanted to use ElecMan's data to track the WWW's base but now that the Navi is deleted, Chaud again tells Lan that he got in the way and quickly attempts to delete MegaMan instead of trying to reboot the power plant. ProtoMan is defeated and everyone is saved. 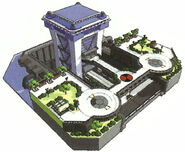 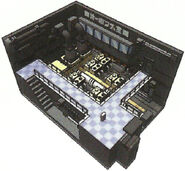 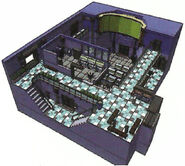 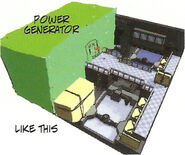 Government Complex in the anime

In spite of Den City being based on Tokyo, the Government Complex bears little to no resemblance to the Tokyo Metropolitan Government Building.