Twister of Time and Space

"And the thought that it is this world that is evil has never crossed your mind? Oh, forget it... If you get in my way, I'll destroy you!"
―Gravity Antonion, Mega Man X8

Gravity Antonion, known as Gravitate Ant-Onion (グラビテイト・アントニオン, Gurabiteito Antonion) in Japan, is an ant-based New Generation Reploid from Mega Man X8 that worked in an anti-gravity laboratory. He was a very intelligent scientist, with a calm and polite demeanor. When he became a Maverick, he created a tower above the anti-gravity lab, which has a lot of switches that shift gravity. During his conversion he became insane to the point of denying the claims of being Mavericks going also as far as to question the world and the Maverick Hunters, and calling them evil instead.

Antonion attacks by creating giant cubes above the player to smash them and by shifting the gravity in the room.  If a cube falls on Antonion, he will lift it up and throw it at the player. He can also create a pillar-like object to hit the player with if they come close to him. After losing some health, he will create a large Squeeze Bomb in the middle of the room, and release a sticky green goo from his abdomen that can hold the player if stepped on.  In Normal and Hard Modes, after losing enough health, he will summon several cubes, dropping them consecutively. He is weak against the weapons gained from Dark Mantis, perhaps partly due to the fact that Shadow Runner and Black Arrow are homing darkness-based weapons (darkness is the absence of light and thus is unaffected by gravitational force), and the Rasetsusen is a short-ranged attack.

Alia: I've detected a Maverick signal up ahead. There are no gravity switches in here. But apparently the target has the ability to alter gravity at will. Be careful when gravity is altered. You don't want to get caught up in the chaos.

Layer: Here's what I know about the upcoming target: The room contains no gravity switches, but the target has the ability to change the direction of gravitational pull at will. Just like the other areas you've come to, background objects may be affected. Now's your chance to use any weapons you may have that aren't affected by gravity.

X: You used to be an incredible scientist. What happened? What are you up to?

Gravity Antonion: Incredible scientist? Who are you to say such things? I don't pursue my research just to earn praise from the likes of you.

X: Have you gone Maverick as well?

Gravity Antonion: Maverick? Once again, you attach labels to me. What arrogance! Hmpf. At any rate, if you choose to stand in my way, I'll destroy you!

Zero: You used to be an incredible scientist, but it looks like you've gone Maverick now.

Gravity Antonion: Incredible? Maverick? What do those words even mean?

Zero: You'd have to ask someone smarter than me.

Gravity Antonion: Your honesty is matched only by your supreme foolishness. Well, at any rate, if you choose to stand in my way, I'll destroy you!

Axl: Antonion...You used to be such a genius. Have you gone insane? What are you planning?

Gravity Antonion: Insane? Ha ha. That's funny. Are you saying that you yourself are perfectly sane? Are you even sure that you're on the right side?

Axl: I'm pretty sure. It's not too hard to tell good from evil. That much I know for sure.

Gravity Antonion: Ha! I couldn't agree more! The problem here is the world we live in. But I plan to fix all that!

X: Did he... Did Sigma make you go Maverick?

Gravity Antonion: My master is not incorrect in his philosophy.

X: But Sigma plans to bring catastrophe to this world! He's evil!

Gravity Antonion: And the thought that it is this world that is evil has never crossed your mind? Oh, forget it... If you get in my way, I'll destroy you!

Zero: Has Sigma made you like this? Did he force you and the others to go Maverick?

Gravity Antonion: Maverick? You actually think you can sum my master up with that word?

Zero: All I know about him is that we can’t let him get away with this or the world's in trouble.

Gravity Antonion: Your honesty is matched only by your supreme foolishness. If you can't understand our great plan, then you must be eliminated.

Axl: Antonion... Has Sigma made you go Maverick?

Gravity Antonion: You're the prototype for our new generation of Reploids. Surely, you understand.

Axl: I don't even wanna understand. Sigma is the bad guy here. PERIOD.

Gravity Antonion and his fellow Mavericks from X8 appeared in the Worlds Unite crossover, debuting prior to the events of their game as part of Sigma-2's Maverick army. 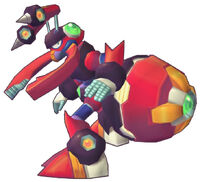 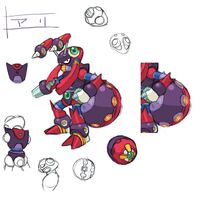 Retrieved from "https://megaman.fandom.com/wiki/Gravity_Antonion?oldid=310088"
Community content is available under CC-BY-SA unless otherwise noted.