"At the conclusion of our experiment, the subject will be able to defy gravity itself! "
―Gravity Man on his Gravity Style, Super Smash Bros. Ultimate

Gravity Man (グラビティーマン, Gurabitīman) is a Robot Master created by Dr. Wily. He has the ability to control gravity with the unit installed in his body. In Mega Man 5, he occupied an anti-gravity research institute and used it against Mega Man.[1] His only offensive weapon against enemies is a buster, but Gravity Man can use the Gravity Hold within a short range from him to freely manipulate his opponents' gravity and his own gravity and then fall like a heavy weight into them.

Gravity Man is a devoted and enthusiastic researcher when it comes to the subject of gravity itself, but his unsocial attitude makes him prefer to work alone without any help or assistance. Gravity Man has a strong interest in physics and dislikes outer space since there is little gravity found in space which would make his Gravity Hold useless.

Gravity Man is one of the eight bosses. He constantly shifts gravity up and down (putting Mega Man on the ceiling when he goes to the floor and vice versa), running back and forth. He may also jump, sometimes shooting bullets from his own buster during the jump. When he changes gravity in his arena, it is Mega Man's opportunity to shoot him. His weakness is the Star Crash, and it can also negate his shots. But using it as a shield to negate his shots instead of throwing it costs more energy, so anytime the opportunity arises, the player should quickly throw the shield at Gravity Man (whether during his jump or gravity shift and he will take heavy damage. It defeats him in seven hits. Due to his tendency to stick to the ceiling when Mega Man is on the floor and vice versa, Gravity Man is immune to the Charge Kick.

Gravity Man appears in Adventure Mode: World of Light as a Master Spirit who runs a Dojo in the Dark Realm. His Gravity Style majorly increases jump height, but majorly decreases move speed and fall speed, as though they were moving in a low-gravity area. His Spirit battle is represented by a fight against Dark Samus in a red costume, and battlefield conditions change rapidly between low and high gravity, causing fighters to change between sudden bursts of mobility and stability. A remix of Gravity Man's stage theme is available as a music track for the Wily Castle stage.

Mega Man Legacy Collection text: He can control gravity, albeit within a limited range. Attack him when you fly past each other!

Amount of damage in units that Gravity Man receives from each Special Weapon in Mega Man 5.

*For Mega Buster, the first number is when the weapon is fired normally; the second is when it is fully charged.
*For Charge Kick, no damage value is listed as it is physically impossible to hit Gravity Man with it.

Gravity Man appeared in the episode "Master of Disaster" from Ruby-Spears' Mega Man animated series voiced by Jim Byrnes. His Gravity Hold is a replaced by a "gravity beam", which he uses to cause the ceiling of a cave and several stalactites to fall.

Gravity Man is a combat robot who was created for Dr. Wily's fifth attempt at world domination. His Gravity Hold was developed based on the theory that gravitational fields are spatial distortions. Gravity Man is able to choose any one point in his surroundings as a gravitational focal point, and cause a gravitational field to be produced around that point. To create a useful focal point, Gravity Man needs something with mass and usually selects a wall or ceiling for this purpose. When Mega Man uses the Gravity Hold as a special weapon, he creates the focal point within the body of his enemy.

Gravity Man first appeared in the story "Holiday of Soldiers", where the eight Robot Masters from Mega Man 5 have part-time jobs in an amusement park to earn money for Dr. Wily. Gravity Man works by distributing balloons.

In the Mega Man Gigamix story Moon of Darkness, the Robot Masters from Mega Man 5 are attacked by the Stardroids, and Gravity Man is defeated by Mercury. 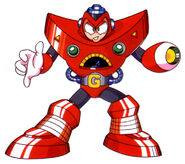 Front, side, and back view of Gravity Man. 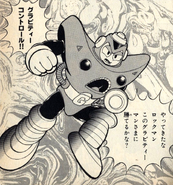 Gravity Man in the Rockman 5 manga.

Gravity Man (And several other robot masters) being constructed in the comics.