The Green Devil (グリーンデビル, Gurīn Debiru) is an improved version of the Yellow Devil that appears in Mega Man 8 and Mega Man & Bass. Its body is made of a thick green slime-like substance that can be manipulated by the eye in the center and from which it got its name.

In Mega Man 8, Green Devil is the boss of the third Wily Tower stage and attacks like the other Devils, except that it can turn its goo into spikes or rush forward as a wave of goo. A feature unique to this Devil is that its eye is covered by a bubble-like coating, preventing shots from hitting its normal form. The goo must be peeled back by striking the chest with attacks (the Flash Bomb instantly opening it), then striking the eye, preferably with Thunder Claw.

In Mega Man & Bass, the Green Devil is the first boss in the game, fought in the game's Opening Stage. It is summoned by King to cover his escape from the Robot Museum after acquiring data from robots for his army. It is weaker than his Mega Man 8 version, taking increased damage from the Mega Buster/Bass Buster and having much fewer invincibility frames than standard bosses. It also cannot dismantle itself across the screen to attack. Instead, it stands in place and throws parts of its body at various speeds and angles at the player. Like the previous version, the protective eye coating must be removed, but only the Mega Buster/Bass Buster will be available for the first battle. However, unlike other bosses, the Green Devil will always reappear if the player returns to the museum stage, and Remote Mine can defeat it in one/two hits depending on who the player is playing as (two hits for Bass, one hit for Mega Man).

The Green Devil appears alongside other Devil robots in the Short Circuits for Mega Man #55.

Wily sends the Green Devil to attack Tengu Man, who betrayed Wily and joined King's army. Tengu Man and Pirate Man destroy it, and they try to escape with the Evil Energy that was powering the Green Devil, but Mega Man destroys the energy.

Like the game, King uses Green Devil to cover his escape from the museum. Bass goes after King and Mega Man destroys the Green Devil. 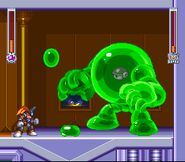 Green Devil in the Rockman 8 manga.