Gregar, known as Glaga (グレイガ, Gureiga) in Japan, is a Cybeast from the Mega Man Battle Network series that was born through the accumulation of multiple bugs, the same method that created Gospel, explaining their similar appearances. However, the accumulation of bugs was natural in Gregar's case, as opposed to being a man-made accident [1]. Cybeast Falzar was created as a counter to destroy it.

When Gregar was born, it attacked and destroyed the Net and everything in it. As a solution, scientists created Falzar to fight it. According to the games storyline, Falzar's involvement in battling Gregar made the Net's condition even worse. So one day while they were fighting, the NetNavis built a pit around them. This pit was known as the Underground, where they were trapped. Over the years, the two became dormant.

Gregar, along with Falzar, were released by CircusMan.EXE in an attempt to capture them for Dr. Wily.

In the Cybeast Gregar version, MegaMan.EXE tried to stop him by forcibly downloading it. Even though Lan and Yuichiro Hikari try to stop him, he still downloads Gregar, and falls unconscious from the strain. Afterwards, Lan collects Healing Water and uses it on MegaMan to weaken the Cybeast. However, Gregar rejects the water, and takes control of MegaMan. He then attacks HeatMan.EXE and nearly deletes him. Again, MegaMan falls unconscious, and Yuichiro states that Gregar may take control of MegaMan the next time he fights, and so, may have to be deleted. Later, after working on him, MegaMan gains the ability of Beast Out and soon afterwards, deletes CircusMan with it. However, he later loses control again, becoming GBeast. In the "Cybeast Falzar" version, nearly identical events happen, but with Falzar inside MegaMan rather than Gregar.

Gregar is later forced into a giant CopyBot and is deleted by MegaMan.

Glaga is very different from his game counterpart. He is originally from a world called Beyondard, which is a world where an alternate Dr. Wily created a Dimensional Area Generator that exploded and caused a permanent merge between the Cyber World and Real World. Glaga and his army of Zoanoroids are at war with Falzer and his own over the right to rule, and the Synchronizer, Trill. During the first episode of Beast, Glaga and Falzer do battle in both the Real World and Cyber World, only to be stopped by both of Rockman's base Beast Forms after fusing with the infant Trill. Near the end of Beast, Glaga defeats Falzer, to which Wily fuses the two together to create a Super Cyber Beast. This configuration then defeats the Cross Fusion Members in Netto's world only to be stopped by Beast Form C.F. Rockman.

Gregar is a being that originated from bugs which were sealed in the Underground. MegaMan accidentally awakened Gregar during his battle against Nebula Grey when he obtained the ability to Beast Out. Gregar then started rampaging all over the Underground. Several NetNavis were summoned to the Underground and fought each other in order to choose the strongest Navi that can use the "Ultimate Program" from Iris in order to destroy the two Cyber Beasts. MegaMan, however, triggered his Beast Out form again to fight against Colonel.EXE and CircusMan.EXE, and Gregar felt a part of his power was inside MegaMan, suddenly appearing and roaring. His roars, however, ended up the battle as CircusMan was deleted and Colonel left suddenly, and MegaMan can controls his new Beast Out form then. Gregar also disappeared, through it was shown that his power is beyond imagination, even if it's just an illusion.

In volume 13 of the manga Gregar and Falzar fuse together and become the powerful Super Cybeast, which is able to appear in the real world, absorbing it into the cyberspace. 60% of Earth is absorbed by it when MegaMan and Bass reach its core and destroys it, making everything return to normal.

Gregar is the final boss of the Gregar version of Battle Network 6, and its side of the field cannot be Area-stolen. If the player happens to lose Area through use of Color Point or Double Point, Gregar will not move forward, making Gregar's fire breath attack unavoidable. Gregar actually possesses 2 hitboxes, its head and its torso; thus, area-hitting attacks are capable of inflicting double damage to it. Gregar sports 2500 HP in its normal version, 4000 HP in its SP version, and 5000 HP in its RV version.

The Glaga (グレイガ, Gureiga) Battle Chip is exclusive to the Japanese version.

Gregar on the cover of Battle Network 6. 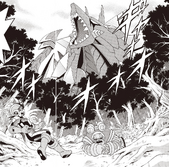