Grenade Man (グレネードマン, Gurenēdoman) is a Robot Master created by Dr. Wily visually designed after a hand grenade (specifically an Mk 2 grenade, or a pineapple bomb), having a similarly textured stomach area, and a headpiece reminiscent of a striker lever. He fights primarily using his Flash Bombs and other such high-explosive weaponry. A special Overdrive system is installed in him, allowing him to move very quickly and to temporarily boost his power.

During the events of Mega Man 8, he was stationed at an ammunition factory somewhere in Argentina, causing havoc with his soldiers and explosive weaponry. His weakness is the Thunder Claw which can reflect Grenade Man's own Flash Bombs back to him while also inflicting good damage towards him as well.

Grenade Man is a sadomasochist who enjoys inflicting and receiving pain, particularly through getting himself caught in the explosions he creates. Even though he's a good and profitable bomber when it comes to the job, his blindness and obsession for sadomasochism usually prevents him from being able to complete his missions effectively. Grenade Man enjoys the stimulant of both battle and explosions while disliking rationality.

Grenade Man goes out to destroy Valentine's Day due to Wily disliking the holiday, destroying chocolates in the street. When Roll sees what he is doing, she points out that his plan is stupid due to chocolate factories being able to make more, and he proceeds to destroy the factories instead. Feeling bad for accidentally helping him, Roll searchs the closest chocolate factory and finds Grenade Man causing havoc inside. Roll tries to convince him to stop, but as he doesn't hear her and she refuses to give him the chocolate she bought earlier, he decides to destroy Roll alongside it. Mega Man appears in time to save her and defeats Grenade Man.

Grenade Man has a cameo appearance in Worlds Collide as part of a large army of Robot Masters.

Grenade Man appears in the Rockman 8 manga and has a brief appearance in the end of Mega Man Gigamix. 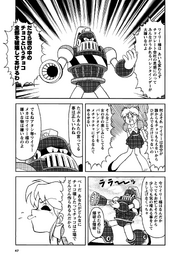 Grenade Man in the Rockman 8 manga.

Retrieved from "https://megaman.fandom.com/wiki/Grenade_Man?oldid=321271"
Community content is available under CC-BY-SA unless otherwise noted.