"I shouldn't need a reason to save lives!"
―Grey to Model A, Mega Man ZX Advent

"Even if you did create this world we create our own destiny."
―Grey to Albert, Mega Man ZX Advent

Grey (グレイ, Gurei) is one of the playable characters in Mega Man ZX Advent. He is the Biomatch for Biometal Model A.

Grey's personality is influenced by his experiences over the course of the game. Being rescued by people who didn't know him, Grey is inspired by this act of kindness to do the same for others, even if they are enemies; Grey openly demonstrates this with his willingness to save the Raiders from an attack by Atlas. Another influence comes from Aile's advice, which encourages Grey to leave his past behind him and focus on making his own future. Because he has no experience interacting with others, Grey has no insight on proper mannerisms (as noted by the Sage Trinity as well as Aile), which makes him seem a little rude at times. Model A in particular describes Grey as "a tough-talking stubborn kid" and "a kind, crazy fool". Despite being paired with Model A, Grey is somewhat like Model X due to the fact they both believe that there shouldn't be a reason to save innocent people. He never smiles throughout the game until the ending of the game.

Because of the premature end of his brainwashing as a result of the Maverick ambush at the Mysterious Lab, Grey spent most of the game with amnesia.

In the manga, unlike his game counterpart, Grey is rather childish and somewhat gullible. He is very obedient to Ashe, never complaining to her demand and whole-heartedly follows her wishes, though he also likes occasionally teasing her even if it means receiving the end of her punches. He has a fondness for sweets or any delicious foods, comically always being shown drooling whenever he sees or smells one.

He first appears within stasis in the Mysterious Lab, and is awakened by a battle between Hunters and Galleons, not knowing who he was or anything about his world. His eyes turn back from red to green since the mind control sequence was stopped from becoming a Megaman that would fight alongside with Albert. Pandora finds him and proclaims him as "Defective", explaining that she has to kill him. However, he grabs a gun from a fallen Hunter, fires on her, and escapes. He is knocked out after fighting Dogu the Giant when the bridge he is standing on collapses.

He is later found by the Hunter Billy, who takes him to Hunter Camp, where he is given a Hunter's License and asked to help escort the Model A Biometal to Legion. However, Prometheus and Pandora attack the train carrying it, and the Biometal responds to Grey. They Megamerge, and the pair allows him to join the "Game of Destiny". Shortly after, Grey discovers the power of A-Trans after defeating the Pseudoroid, Buckfire  (Diaburn in the Japanese version). Model A, though unsure of assisting Grey, decides to tag along for his own safety.

He is then given an invitation by the Sage Trinity to visit Legion, the most powerful organization in the world in order to inspect Model A. During his venture, he encounters four other Mega Men, Aeolus, Atlas, Thetis and Siarnaq, who wields the Biometals, H, F, L and P, respectively. He first fights against Atlas and manages to defeat her before she harvests the souls of a stray group of Raiders to Model W and in the process, breaks a cipher, revealing secret encoded data about the Model W. Grey then finally heads to Legion but is temporarily stopped short by Siarnaq, but is also defeated, resulting in another cipher, this time, showing a vague figured as well as a hint as to the creator of Model W, who appears to be one of the Sage Trinity. Though Model A is unsure at this point, Grey continues on ahead for the truth. The perpetrator appears to be none other than Albert, who is seen with several Model W fragments and escapes Grey's attack, but not before telling him he was 'made in his image'.

During his missions for Legion, Grey unlocks more ciphers after defeating the four Mega Men he met earlier while traveling to Legion. After completing the new destination Master Thomas had added to the transerver, he then encounters Aile in the Quarries, along with a Model W. Grey demands Aile to step away from the Model W, but Aile refuses and Double-Megamerges with Model X and Model Z. She decides to challenge Grey for the Model W. After Aile's defeat, Grey unlocks the final cipher, revealing data of Albert's goal to combine all the Model Ws forming the ultimate Biometal, Ouroboros.

Later on, he discovers that he was made as an "Alternate body" for Albert, who created Model A, also known as Model Albert. After Grey defeats Albert, he then collapses. Meanwhile, during the fight between Aile and the four Mega Men, Model Z insists that Aile has to go rescue Grey while he stalls the enemies. It is unknown whether Model Z survived the fall of Ouroboros. After Grey wakes up at Hunters' Camp and finishes his conversation with Aile, he and Model A go explore the world in search of their destinies.

Grey is the protagonist of the story and the Biomatch for Model A. He and Model A are employed by Ashe to be her bodyguards in her treasure hunting, protecting her whenever there's Maverick Reploids or Mechaniloids getting their way while looking for treasure. Although, most of the times, Grey, together with Model A, acts more like Ashe's errand boy, doing things like carrying all her luggages or looking for foods for them while Ashe is sleeping. 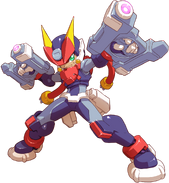 Concept art.
Add a photo to this gallery

Retrieved from "https://megaman.fandom.com/wiki/Grey?oldid=312010"
Community content is available under CC-BY-SA unless otherwise noted.