Ground Man (グランドマン, Gurandoman) is one of the first three selectable bosses in Mega Man & Bass, alongside Astro Man and Cold Man. He is a Robot Master created by King to excavate ruins, but sometimes hoards treasure that he finds for his own personal collection without consulting his leader. He likes excavating with a passion and only stops when he is ordered to do so. He is said to be the most powerful robot in King's army. His Special Weapon is the Spread Drill, a drill-like missile that can separate into smaller drills. He can also transform into a small drill-shaped machine, being invincible during the attack, and uses a giant drill when in the ceiling.

Despite having an unsocial and inhospitable attitude while hardly ever speaking at times, Ground Man is a deep thinker, having and maintaining a personal insight view of the world around him. He enjoys finding rare treasures from within his various excavations in his spare time while disliking both coarse ground and underground water which gets in the way of his work.

Ground Man's main method of movement is by jumping towards the player. Ground Man can dig into the ground, reappearing in another place, fire off a Spread Drill that splits into smaller drills as it travels, transform into an invincible drill tank that moves across the ground, changing directions three times, or jump into the ceiling, moving after the player and using a gigantic drill to attack them that has to be dodged by sliding or dashing out of the way. Remote Mines prevent Ground Man from digging into the ground or ceiling, and are Ground Man's weakness.

Amount of damage in units that Ground Man receives from each Special Weapon in Mega Man & Bass.

Ground Man and King's other robots appear in the Rockman 8 manga, but with the exception of Pirate Man, they leave shortly after their appearance.

In the Rockman & Forte manga, Ground Man is causing earthquakes in the city. Mega Man and Bass defeat him by taking his giant drill and using it against him.

In the Mega Man comic from Archie Comics, Ground Man first appears alongside most of the other Robot Masters from the series as part of Dr. Wily and Dr. Eggman's Robot Master army in the Worlds Collide crossover with the Sonic the Hedgehog comic. During the battle he apparently approached Knuckles the Echidna, one of Sonic's allies, but seems to have been unsuccessful in defeating him given the latter's continued participation in the battle. This battle was only possible due to the strange reality of the Skull Egg Zone and the altered reality created by the Genesis Wave, which was undone by Mega Man at the end of the crossover. 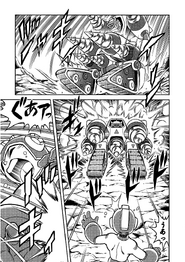 Retrieved from "https://megaman.fandom.com/wiki/Ground_Man?oldid=338725"
Community content is available under CC-BY-SA unless otherwise noted.