"Well, well, well... What have we here... Why, it's Officer X. This is horrible! Why do I have to face someone like you here?!"
―Ground Scaravich, Mega Man X6

Ground Scaravich (グランド・スカラビッチ, Gurando Sukarabicchi) is a Reploid modeled after a dung beetle who serves as one of Gate's eight Nightmare Investigators in Mega Man X6.

Ground Scaravich's appearance is based off that of a scarab. He has a short stature and short limbs, and a beetle shell on his back. He has a long, pointy moustache and his head has two pincer-like horns on top. He has a rhombus-shaped gem in his forehead, a trait he shares with the rest of his fellow Nightmare Investigators.

Scaravich is somewhat cowardly, bemoaning having to fight powerful Reploids such as X and Zero. However, he also has what it takes to overcome this so that he may analyze X's data. He claimed to have wanted to study Zero in the past, but had since moved on. He has a notably elderly-sounding voice.

Ground Scaravich was once a treasure hunter who was wanted by the Maverick Hunters for damaging historic ruins in his search for valuable data. In his work he discovered a lot of data on ancient robots and Gate took care of him in exchange for this information. Gate later sent Scaravich to a forbidden area (where X and Zero were discovered) and Alia, upon witnessing him enter the facility, ultimately intercepted and disposed of him as punishment for his misconduct. She felt bad for doing this, but Gate appeared to not have cared about what happened to him.[1]

Ground Scaravich was later resurrected by Gate in Mega Man X6 as part of his Nightmare investigation team. He was sent to the abandoned Central Museum near Queensland, Australia to examine the Nightmare, where he was confronted by the Maverick Hunters in the main hall. He was frightened at first, but decided to fight them anyway to obtain their DNA data and was destroyed.

Scaravich is most vulnerable to Yammar Option. As Zero, the player can also use the Z-Buster to destroy his rocks, although it just causes him to run off-screen to get another one.

X: Ground Scaravich! You must be the burglar of ruins! What are you doing here?

Ground Scaravich: Well, well, well... What have we here... Why, it's Officer X. This is horrible! Why do I have to face someone like you here?!

X: Be a smart Reploid and give me the Information on the Nightmares.

Ground Scaravich: I'd rather just see what DNA data you have!

Zero: Ground Scaravich! Why do you need to steal from another ruin? Hmm... You seem to be very close to the Nightmares...

Ground Scaravich: I am cursed, I know it! You are Zero. I heard you were dead. I really wanted to obtain your DNA data, but I no longer need it.

Zero: What do you mean?

Ground Scaravich: You can fight me to find out!

Ground Scaravich is one of the many Mavericks featured in the Worlds Unite crossover event. He joins the other Mavericks in attacking Sonic the Hedgehog, Mega Man, and X's other allies before departing to invade other worlds. 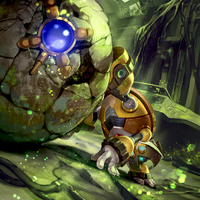 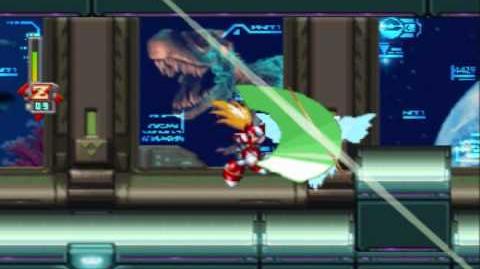 Retrieved from "https://megaman.fandom.com/wiki/Ground_Scaravich?oldid=356168"
Community content is available under CC-BY-SA unless otherwise noted.