Gun Volt (ガンボルト, Gan Boruto), also known as Gunbolt, is a combat Mechaniloid that appear as an enemy Maverick in the Mega Man X series. Gun Volts attack by sending sparks across the floor that travel over the terrain. They can also launch two missiles, both of which are best avoided by jumping. Gun Volts are highly durable, therefore using a Special Weapon that hit multiple times is the most efficient way of getting rid of one.

In Mega Man X and its remake, Maverick Hunter X, Gun Volts are found in the Opening Stage, Spark Mandrill's stage, and Storm Eagle's stage. Storm Tornado is very effective against them. One is guarding the Storm Eagle stage Sub Tank.

Gun Volts are appearing in the upcoming Rockman X DiVE in their Mega Man X7 design. 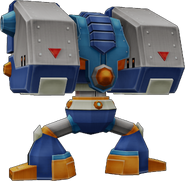 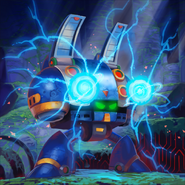 Retrieved from "https://megaman.fandom.com/wiki/Gun_Volt?oldid=315604"
Community content is available under CC-BY-SA unless otherwise noted.