GutsMan.EXE is the NetNavi of Dex Ogreon in the MegaMan NT Warrior anime series. Squarely a brute-strength type of Navi, GutsMan is dull-witted and clumsy, but cares for his friends and helps them in anyway he can, though he often just gets in the way. He has a crush on Roll in the same way Dex has a crush on Maylu Sakurai and much like how Dex claims himself as a rival to Lan Hikari for Maylu's affections, GutsMan does the same thing to MegaMan for Roll's affections as well. He later becomes an employee of Number 1 Curry with Dex under Yahoot.

GutsMan's dedication to his friends is most well displayed while he and his allies are searching for MegaMan's new body in the wake of PharaohMan's awakening. Finding themselves trapped in a collapsing cavern, the Navi valiantly saves Roll from falling debris, then allows everyone to escape by holding up the weight of the structure on his own which soon causes him to be deleted via the pressure of the collapse itself. He does, however, recover following the incident, and remains helpful.

He participates in the N1 Grand Prix, where he beats GreenMan.EXE in a match within 30 seconds, setting a new record just before Chaud Blaze and ProtoMan.EXE immediately break the record and beat their opponent in 3 seconds.

He appears in episode 9.

He appears in episode 15. 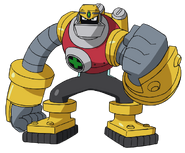 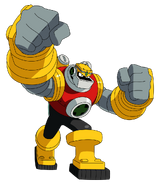