Gyro Attack (ジャイロアタック, Jairo Atakku) is Gyro Man's Special Weapon, a green propeller-shaped cutter that is fired forward and can change direction, up or down, once per shot.

Mega Man obtains Gyro Attack after defeating Gyro Man. When the propeller is fired, pressing up or down while it is flying will change its trajectory to the pressed direction, but only once per propeller. Each usage of the Gyro Attack uses 1 weapon energy unit. With a full weapon energy gauge, it can be used 28 times. Gyro Attack is the weakness of Crystal Man and Circring Q9, and is also helpful against Dark Man 3.

Gyro Attack is obtained by defeating Gyro Man in the "Mega Man 3~6" course. It functions like Mega Man 5, but can be fired only 14 times due to the game's smaller weapon energy gauge. It is most effective against Plant Man and Yellow Devil.

After defeating Gyro Man in the "Search for Wily!" course, Gyro Attack can be obtained by the player that takes his Special Weapon Item first. If it isn't taken before vanishing, it will be lost.

Unlike previous appearances, the player can't control the direction of the propeller. Instead, it acts like Magnet Missile, firing a propeller-shaped cutter forward that moves up or down when close to a target. Each usage of the Gyro Attack uses 1 weapon energy unit. With a full weapon energy gauge, it can be used 16 times. Centaur Man is weak against this weapon.

Also, Gyro Man says "Gyro Attack" when he does a fast dive attack in this game.

Gyro Man attempts to shoot his Gyro Attack at Mega Man and cuts a tree, Spark Man slipped after Mega Man shot the snow to reveal the ice and Gemini Man was clueless so he bumped into Spark Man and they fell on the tree that fell on Gyro Man.

Gyro Attack is only seen being used by Gyro Man once, being his dive attack from Mega Man 2: The Power Fighters rather than a projectile. While the small propellers don't appear even in concepts, Gyro Man's profile notes that he can use Gyro Attack, which works like bamboo-copters to fly vertically and hit enemies at different elevations. Gyro Man controls this movement by sending remote signals to the propellers and adjusting the speed of their rotation.

Mega Man got Gyro Attack after a difficult battle against Gyro Man. In the manga Mega Man throws the blades from his hands instead of firing them from his buster. 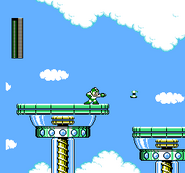 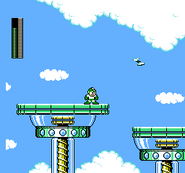 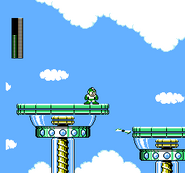 Mega Man with Gyro Man's weapon in the Ruby-Spears cartoon

Gyro Attack in the Rockman 5 manga