"That is not a problem."
—Gyro Man, Mega Man & Bass database

Gyro Man (ジャイロマン, Jairoman) is a Robot Master created by Dr. Wily that resembles a helicopter. He was originally planned to have a flying device, but it was replaced by a propeller built into his back due to cost issues (some sources say Wily's original design failed and he used a propeller because he was out of money - a theory that also supports the origins of Crystal Man). Gyro Man actually prefers this type of flight.

In Mega Man 5, he was ordered by Dr. Wily to take over a hanging garden and obtain money from the admission fee, but the attendance dropped as soon as he took over and Gyro Man became bored. His weapon is the Gyro Attack, small propeller-shaped cutters that can be controlled to move sideways, upward, or downward. He can't stand changes in gravity as they put stress on his propellers; not surprisingly, his weakness is Gravity Hold.

Gyro Man is very proud of his flight abilities and his aerial lifestyle, but he tends to be both disdainful and contemptuous of others, feeling they are not worth his time; this has given him a bad reputation among his colleagues. Gyro Man enjoys playing with bamboo copters and eating gyros in his spare time. He dislikes jet engines.

Gyro Man is one of the eight bosses. He has two attacks. While on land, he attacks with Gyro Attack. To avoid it, the player has to jump over it to the side it comes, or jump over it and return to his position. Any of these options will make the Gyro Attack miss and leave Gyro Man vulnerable to attacks. When he flies above the clouds, he will fire a Gyro Attack from above and then try to dive into Mega Man. The player has to slide from side to side to avoid the Gyro Attack if it comes above him, and/or jump over it so it misses, and after that, slide to the side Mega Man has less space then slide to the other side so Gyro Man lands and misses, leaving him vulnerable to attacks, and Mega Man has a lot of space to dodge his next attack. His weakness is Gravity Hold, which can hit him regardless where he is, but as the player has fair enough energy to destroy him, it is better not to use it on his level, so the player comes with a full weapon bar to defeat him. Gravity Hold can destroy Gyro Man in seven hits.

Gyro Man is one of the six bosses from the "Mega Man 3~6" course. He will throw a Gyro Attack when on ground. Later on, the screen will move and will try to dive at Mega Man and doesn't use the Gyro Attack unlike in Mega Man 5. He will also then double himself.

"Your best chance is when Gyro Man lands on the ground! A multi-angle weapon is effective against flying mechs."
—Dr. Light

Gyro Man is one of the six bosses from the "Search for Wily!" course. He behaves like the previous game, except he fires four Gyro Attacks at once and will shout "Jairo Atakku!" when he charges at the player character. He also has his propeller to defend him. Plant Barrier is his weakness.

Mega Man Legacy Collection text: Dr. Wily's limited budget is what forced him to have a propeller. He will cowardly hide himself in clouds, but if you have the weapon that plays on his weakness, he'll go down quickly!

Gyro Man appeared in the episode "Cold Steel" from the Mega Man animated series. Gyro Man, Spark Man and Gemini Man are disguised as a rock band that hypnotizes humans with their music. In the cartoon, the Gyro Attack is Gyro Man's own propeller instead of propeller-shaped cutters, and Mega Man is able to fly when using it. He is voiced by Garry Chalk regularly and by Jim Byrnes whilst in disguise.

In the manga, Gyro Man appeared in the story "Holiday of Soldiers", where the eight Robot Masters from Mega Man 5 have part-time jobs in an amusement park to obtain money for Wily. He operates the Roller Coaster. He also appears in Mega Man Gigamix.

Gyro Man debuted during the Worlds Collide crossover as part of Dr. Wily and Dr. Eggman's Robot Master army. While defending the Wily Egg, he teamed up with several other wind-based Robot Masters in pursuit of Tails, Sonic the Hedgehog's sidekick. His torso plate appeared in Issue 53 when Wily told Break Man his making various contingency plans. 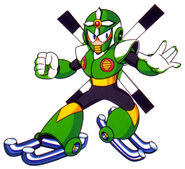 Front, side, and back view of Gyro Man.

Gyro Man in Mega Man: Upon a Star.

Gyro Man in the Rockman 5 manga.

Gyro Man (And several other robot masters) being constructed in the comics.