Habarool (ハバルール, Habarūru) is a Reaverbot from The Misadventures of Tron Bonne that appears in the Nakkai Desert and Nakkai Ruins. It usually only lays down in the floor, but when an enemy is spotted, it will raise and chase it. There are three types of Habarools in the game, the most common and weak are green, the orange colored variety is stronger and only appear inside the ruins, and one large sized black variety able to shoot lasers from its eye appears near the end of the first stage.

In Mega Man Gigamix, some of the alien robots protecting the asteroid Alpha are based on Habarool. 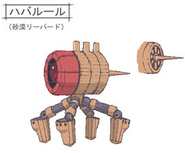 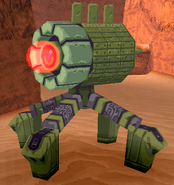 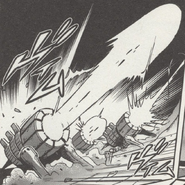 Habarool in Mega Man Gigamix.
Add a photo to this gallery
Retrieved from "https://megaman.fandom.com/wiki/Habarool?oldid=221926"
Community content is available under CC-BY-SA unless otherwise noted.