The Hadoken (波動拳, Hadouken, "Surge Fist" or "Wave Motion Fist") is a move from Capcom's Street Fighter series of fighting games that was included in as a secret power-up obtained from a Light Capsule in Mega Man X, Maverick Hunter X, Mega Man Xtreme and Mega Man Xtreme 2, and is executed in the same way, inputting the combination ↓↘→+ATTACK while X's health gauge is full and he is on the ground to unleash a powerful energy ball. It causes 32 damage, being able to destroy most bosses and enemies in a single hit.

In Mega Man Xtreme and Xtreme 2, the Hadoken can be used by holding ↓ and firing a fully charged buster shot, though he does not have to be at full health, but it does not have the one-hit kill feature. Appropriate to the attack's origins, Dr. Light's hologram appearance when unlocking this Light Capsule depicts him wearing a Martial Arts gi instead of his standard lab uniform. In the original Mega Man X, using this ability will have X say in a high-pitched, quick voice "Hadoken," marking the only instance of audio speech in the game. According to Light in Maverick Hunter X, X is capable of mastering the Hadoken, since it is a technique fueled by the spirit, and X's soul is nearly human.

In Mega Man X4, the Hadoken is one of Magma Dragoon's attacks. In Mega Man X: Command Mission the bosses Ninetails and Threetails use the Annihilator Hadoken (滅殺波動拳 Messatsu Hadoken). In Project X Zone X uses a powerful Hadoken alongside Zero's Genmu Zero.

Hadoken is Ryu's special weapon from Street Fighter X Mega Man. When used, Mega Man will release a small and slow Hadoken, and can be charged to shoot a quick yellow Hadoken. The Hadoken is the ideal weapon against Chun-Li, Sagat, M. Bison, and Akuma; though the charged Hadoken inflicts extra damage to Akuma and M. Bison, Chun-Li only incurs regular damage.

When fighting against Ryu, an uncharged Hadoken from Ryu can be negated with three Mega Buster shots. Hadokens of any magnitude can be reflected with the Aegis Reflector.

The original Hadoken is a special weapon from Street Fighter X Mega Man. When used, Mega Man will release a small and slow Hadoken from his hands, and can be charged to shoot a quick yellow Hadoken. It deals the same damage as the Hadoken special weapon and it also acts as the weakness for Chun-Li, Sagat, M. Bison, and Akuma, but it has some notable differences.

The original Hadoken can only be used on the ground, it doesn't consume weapon energy and it can be used with the Seiei Enbu, firing two Hadokens, one slow and one fast.

The only way to obtain this weapon is by the use of a secret code:

On the Start Screen, hold down the Fire and Jump Buttons for 6 seconds until a noise can be heard, indicating the activation of the code. This code also unlocks the Seiei Enbu weapon.

The weapon can be executed in the same fashion as the Street Fighter move: ↓↘→+Fire 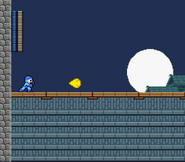 Mega Man firing a charged Hadoken from his hands.

Ryu employed the Hadouken during his appearance in Worlds Unite, notably dispatching Vanishing Gungaroo with a single blast, with Mega Man in particular barely being able to give positive notice to the attack.

X will go into the animation of doing a Hadoken if he taunts, but without shooting a Hadoken itself. If X is however using his hyper combo "Armor of Light" during his taunt his hands will glow, and the taunt can do low damage at very close range.