Hammer Joe (ハンマージョー, Hanmā Jō) is an armored Sniper Joe from the Mega Man series that swings a ball and chain and throws it at enemies. Unlike normal Sniper Joes, it can only be hurt when its eye is open. Like Air Man, Hammer Joe's face is built into its torso instead of having a head.

In Mega Man II they appear in Needle Man's and Hard Man's stages, as well as the Wily Station.

In Mega Man III they appear in Snake Man's, Spark Man's and Drill Man's stages, as well as the last stage.

Hammer Joe also had a cameo appearance in a field from Mega Man's Soccer.

Hammer Joe appeared as an enemy in Mega Man Network Transmission. His Battle Chip is Hammer.

Hammer Joe appeared as an enemy in the games Adventure Quiz: Capcom World 2 and Street Fighter × All Capcom.

Amount of shots/hits from Special Weapons it takes to destroy a Hammer Joe. 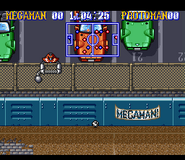 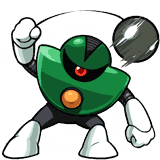 Hammer Joe in the Rockman World 3 manga.
Add a photo to this gallery
Retrieved from "https://megaman.fandom.com/wiki/Hammer_Joe?oldid=322686"
Community content is available under CC-BY-SA unless otherwise noted.