Hard Knuckle (ハードナックル, Hādo Nakkuru) is Hard Man's Special Weapon in the Mega Man series. When utilized, there is a short delay before the knuckle starts moving forward. It is somewhat slow, but has great strength. Mega Man can slightly guide the knuckle up or down once it is moving. Hard Knuckle can also be used to break through destructible blocks in Mega Man 3 and Mega Man: The Wily Wars.

Hard Knuckle is obtained after defeating Hard Man. It is the weakness of Top Man and Quint. Needle Man and Wily Machine II are immune to it.

Besides Mega Man 3, Hard Knuckle is available in the Wily Tower mode. It causes the highest amount of damage against Buster Rod. G (both encounters) and the second form from the "Wily Machine". It can also be used to destroy blocks in Mega Water. S's stage and Hyper Storm. H's stage.

Hard Knuckle is obtained after Hard Man's defeat in episode 3. It is Top Man's weakness.

Hard Knuckle is used by Mega Man in the fighting games Super Smash Bros. for Nintendo 3DS and Super Smash Bros. for Wii U as his down air attack. Mega Man fires the Hard Knuckle directly below him. If the opponent gets hit by the attack from the sides, the move inflicts 12% damage and it is sent flying to the side they were hit. However, if the opponent gets hit by the bottom part of the attack, it inflicts 14% damage and functions like a Meteor Smash, knocking it in midair straight down upon contact. This can be deadly if an opponent finds itself in the air without a platform below it, as it can be sent straight down and get KO'd by the attack.

Mega Man used Hard Knuckle in the episode Bad Day At Peril Park. After defeating Hard Man by blowing him up from the inside with a Mega Buster shot, Mega Man takes the Hard Knuckle from him, utilizing it to knock Proto Man off a rock he was standing on to fire at the heroes.

Hard Knuckle was used by Mega Man in episode 32 to defeat Top Man. 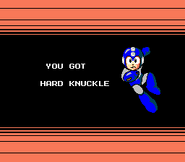 Hard Knuckle in the Short Circuits from Mega Man #48