Hari Harry (ハリハリー, Hari Harī) is a porcupine robot created to guard mines of energy resources. These enemies are native to Needle Man's stage in Mega Man 3 and Mega Man II, and also appear in Episode 1 of Super Adventure Rockman. They shoot spikes and roll up into balls like hedgehogs. Hari Harries are invincible in their balled-up forms, but the Gemini Laser and Top Spin can destroy them in one hit.

Amount of shots/hits from Special Weapons it takes to destroy a Hari Harry. 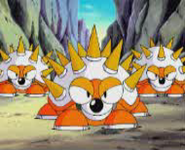