Harp Note (ハープ・ノート, Harp Note), known as Lyra Note in the English anime dub, is the EM Wave Change of the characters Sonia Strumm and Lyra from the Mega Man Star Force series. Harp Note is registered under Project-TC as No. 004.

When Sonia's manager, Chrys Golds, comes looking for her, she knocks him out with a Shock Note. She then proceeds to attack other people throughout Echo Ridge and other places, and Mega Man ends up pursuing her, having to fire back to deflect her Shock Notes before they hit him. After Harp Note is defeated, Mega Man convinces her to stop attacking, and Sonia then forms a BrotherBand with Geo.

Later on, after Geo is separated from Omega-Xis and cuts his Brother Bands, Harp Note comes to Omega-Xis' aid, but fails to stop the FM-ians from taking the Andromeda Key from him.

Harp Note appears again in the second game, and fights alongside Mega Man. After being teleported away by the Kamikakushi, Harp Note is brought before Hollow and was told to work with Vega, if she wanted Geo and his friends to come to no harm. Mega Man tracks her down to the Bermuda Labyrinth, where Harp Note declares herself an enemy of Mega Man and cuts the BrotherBand with him. Eventually, Mega Man fights Harp Note and convinces her to join his side again.

Harp Note once again returns in the third game under Project TC's Trans Code No. 004, and aids Mega Man in his cause as he battles against the Dealer organization. However, she is not a fightable boss in this game.

Harp Note is kidnapped and taken 200 years into the past by ClockMan.EXE (a NetNavi able to travel through time by creating warp holes). Mega Man follows them through a warp hole made by Dr. Goodall and successfully rescues her with MegaMan.EXE's help.

Lyra Note appears in the Shooting Star Rockman comic. She initially appears as an antagonist and orders a fake Andromeda (made of EM viruses) to attack Mega Man. But, this is later revealed to be a "test", and she joins Mega Man in defeating the true Andromeda.

Harp Note is capable of the following abilities and attacks, some of which are restricted to the anime or games exclusively: 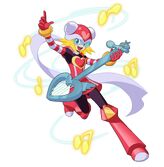 Harp Note on the Gravity Plus Battle Card.

Harp Note with Taurus Fire and Mega Man in a calendar. 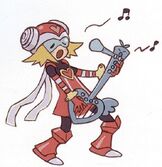 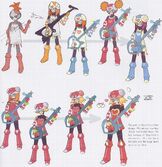 A rough draft for a Harp Note Battle Card.

Harp Note being controlled by Lyra

Harp Note as she appears in the anime

Harp Note at the concert

Harp Note in a shopping mall

Harp Note in the wave world

Harp Note trapped in a bubble