"Does Fire Man complain about how hot he is? Because I'm supposed to be a direct upgrade on his design, and you'd think heat resistance would be a part of that... I don't even want to move... "
―Heat Man, Mega Man (Archie Comics)

Heat Man (ヒートマン, Hītoman) is a combat Robot Master from Mega Man 2 created by Dr. Wily based on Fire Man's design. His body has a box-like shape which resembles a Zippo lighter, with a lid that Heat Man can use to retract his head into for additional protection, but it can sometimes close down onto him unintentionally. Heat Man is designed to be highly resistant to sources of heat, including fire and magma, and has a dial in his back that regulates the power of his flames, which few are aware of.

His Special Weapon is the Atomic Fire, a heat-based weapon powered by highly compressed nuclear energy, which can be charged to produce bursts of fire at temperatures of up to 12,000 degrees Celsius (21,632 degrees Fahrenheit). He can also spit fire from his mouth and project enormous fire blasts from his hands. Heat Man's favorite attack is to first surround himself in flames for protection, making him invulnerable for a short time, before charging at his opponents at high speed from across the arena, causing major damage to his foes by crashing into them.

Whilst Heat Man lacks enthusiasm for his line of work, he is carefree and happy to work at his own pace in doing so. He enjoys summer barbeques, but has a dislike of water (particularly from his weakness, the Bubble Lead) and cold things, such as ice cream.

Heat Man is one of the eight bosses from the game. He can be difficult to destroy without his weakness, but the Mega Buster can defeat him in seven shots on the USA Normal difficulty and fourteen on Difficult (original) setting. First, he shoots Atomic Fire, which are three blobs of fire that when they touch the floor, they extend upward to make fire pillars. To dodge, the player has to run towards Heat Man as he fires the three fire balls at Mega Man, jumping over the lowest one. The player has to be careful not to get hit by the pillars, then shoot at Heat Man. The player has to be very careful and take in mind that, as Heat Man receives damage, he ignites and dashes after a few seconds, and in that state he is invincible.

His weakness, Bubble Lead, can ignore the effects of the fire pillars and deals immense damage to him; however, he is invulnerable to Bubble Lead while ignited. It defeats him in just three hits in Normal, and five in Difficult setting.

Another strategy is, to shoot Heat Man right after he stops dashing and repeat until he is defeated. This should be combined with Bubble Lead, as this will save time and energy, and defeat him faster. More advanced players are able to shoot him quick enough to not throw any fire.

If Crash Bomber or Atomic Fire is used on Heat Man (the latter can only be used during the rematch battle in Wily Stage 5), his health will be regenerated completely. Crash Bomber also causes Heat Man to dash about the battle ground at high speed.

The second Doc Robot in Shadow Man's stage copies Heat Man's moves, and before the battle, Heat Man has a cameo appearance as program data copied by Doc Robot. This Doc Robot is weak against Top Spin and Shadow Blade.

Heat Man is one of the four bosses from Mega Man 2 that appears in Dr. Wily's teleport system inside the Wily Castle. He does the same attacks as in Mega Man 2, however, should the strategy of shooting him right after he stops dashing is done, he will still throw the fire right after entering his stage of invincibility before his next dash attack.

Heat Man is one of the six bosses from the "Mega Man 1~2" course.

"Heat Man will try to do the Bodily Crash if you go near him. Watch out! There can be one weapon that extinguishes fire. Find it, and you'll win!"
—Dr. Light

Heat Man is one of the six bosses from the "Search for Wily!" course.

Heat Man and other fifteen robots are rebuilt by Ra Moon in the Lanfront Ruins, and Heat Man is one of the second bosses from the game. After Metal Man's defeat, the player must decide if Mega Man will proceed by a river or a mountain, being the only choice to affect a boss encounter. Choosing the river will lead to a battle against Bubble Man, and the mountain to Heat Man. If the player loses against Heat Man, the defeated Mega Man falls to the ground as Heat Man laughs triumphantly- although he ends up being interrupted partway through by his lid falling on his head. Mega Man is then saved by Guts Man, and Mega Man can battle Heat Man again.

In the mountain path, Mega Man will meet Guts Man before fighting against Heat Man. Guts Man says he found Bubble Man disabled (hinted to have been defeated by Proto Man) and took his Bubble Lead for Mega Man, which is Heat Man's weakness and is used to defeat him. If Mega Man chooses the river, Guts Man will instead appear after Bubble Man's defeat to give the Atomic Fire, which he took from a disabled Heat Man.

Heat Man appeared as an enemy in Rockman Strategy, and could also be recruited to the player's team. He first appears in the Caldera in Indonesia, where he and Napalm Man are placed to aid Leo. He later returns as one of Apollo's support Robot Masters, the other being Knight Man

Translation: This robot has excellent heat resistance and can control fire as he pleases. Make sure to dodge his ramming attacks by jumping forward.

Enemies in Heat Man's stage, a dangerous area with magma.

Amount of damage in units that Heat Man receives from each Special Weapon in Mega Man 2.

Heat Man appears in the episode Bro Bots from the Mega Man animated, where he works with Elec Man and Needle Man. The three attack the city's museum and are defeated by Mega Man and Proto Man, being retrieved by Dr. Wily. They later appear in Wily's hideout and attack Mega Man, but are paralyzed by him. The only attack Heat Man used in the series was his ability to spit fire.

Heat Man appeared in Episode 20 of the cartoon Captain N: The Game Master, where he plays football against the main characters. Heat Man is taller (at least in terms of proportions), his main color is red and he has a blaster on one hand. He also looks much more metallic and has a picture of a flame on his armor.

In the manga Mega Man Megamix, Heat Man appears in the story "Orders to Destroy R", where he, Crash Man and Metal Man appeared to help Air Man when he was outnumbered by Dr. Light's robots. When Mega Man went after Wily using Item-2, Heat Man asked Crash Man to give him Crash Bombs, which he consumed to use as boosts to pursue Mega Man by air, fighting against him along the way. Near Wily's castle, Bubble Man appeared in the sea below and attacks Mega Man. During the chase, Mega Man managed to kick Heat Man into the water, damaging him because of the sudden temperature change and heating the water near Bubble Man, who had to escape to avoid the heat, making them unable to continue the pursuit.

In the original version of the story from Rockman Remix, Heat Man only appeared in two panels, the first showing that he was defeated by Elec Man in Wily's base, and the second in the last panel with Wily and the other seven robots.

Heat Man is the only Robot Master from the games to appear prominently in the comic. He caused mayhem in an airport and attacked Dr. Light's house.

Heat Man, alongside Bubble Man, Quick Man, and Flash Man, simultaneously attack Mega Man inside Dr. Wily's base. At first it seems they will be victorious, but Mega Man defeats Flash Man and takes his Time Stopper, using it to stop the other three robots, easily destroying them.

Front, side, and back view of Heat Man.

in Super Adventure Rockman, with an arm cannon 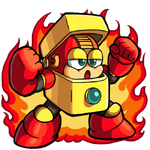 Heat Man (overlapped by one of the Bit Benders) in Rock'n Game Boy.

Heat Man illustration by Hitoshi Ariga for the Hobby-Rock event.