Heel Navi (ヒールナビ, Hīrunabi), also known as HealNavi due to a mistranslation, is a NetNavi from the Mega Man Battle Network series with an intimidating appearance. They are mostly wielded by criminals or are solo NetNavis, being the most common solo NetNavis that MegaMan.EXE will encounter.

Heel Navis do dirty jobs for money and some work for evil organizations. However, not all of them are evil. Some are good NetNavis, but are outcasts because of their appearance.

Some Heel Navis are opponents in Mega Man Battle Network 4, and some participants in the tournaments use Heel Navis. They are usually used by criminals or are rabble rousing, trying to stir up some kind of trouble.

In Mega Man Battle Network 5, it appears that using Dark Chips too many times will result in a NormalNavi becoming a Heel Navi. Their color scheme distinguishes them from typical NetNavis. They appear in the Undernet in large numbers, but also in secret areas that no NormalNavi are found in. These Heel Navis usually have an even darker shading or other distinctions that make them more menacing.

In Mega Man Battle Network 6, there are some Heel Navis who were hired by Mayor Cain to help awaken the Cybeast inside MegaMan.EXE through a special chant. A group of them even attempt to ambush MegaMan on a few occasions, but not all Heel Navis work for Mayor Cain. Others are just freelance trouble makers that do bad things for their own agenda. Toward the end of Battle Network 6, CopyBots are used to send many Heel Navi's to attack in the real world. Interacting with them will trigger a random virus encounter.

Each tournament from Mega Man Battle Network 4 has one participant with a Heel Navi:

While normal Heel Navis do not show up in the anime, Navi Blacks show up in Rockman.EXE Stream as part of a virus army sent by Wan Tanmen to steal Cardamom’s legendary panacea recipe. They appear to be unable to speak, instead making high-pitched squeals, but seem to be able to independently slot-in battles chips, using the CannBall, Sword, and Step Sword chips. The are deleted by Rockman.EXE. Nihao! Net Hermit 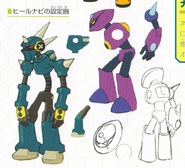 Early drafts of Heel Navis
Add a photo to this gallery

Retrieved from "https://megaman.fandom.com/wiki/Heel_Navi?oldid=317857"
Community content is available under CC-BY-SA unless otherwise noted.