Heli Buton (ヘリブトン, Heributon) is a flying robot created by Dr. Light shaped like a Hercules beetle. They were modified by Dr. Wily and appear as enemies in Mega Man 6, being native to Plant Man's stage. Heli Butons come down from the trees and fly slowly toward Mega Man. They are said to be good friends with Batabattan.

Jet Buton (ジェットブトン, Jettobuton) is an improved Heli Buton that appears near the end of Plant Man's stage. It makes a beeline straight toward Mega Man and doesn't stop going.

Heli Butons appear breifly in Mega Man Megamix, two of which appear alongside a Robbit. 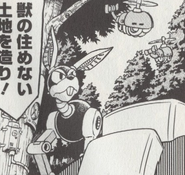 Heli Butons with a Robbit in Mega Man Megamix.
Add a photo to this gallery
Retrieved from "https://megaman.fandom.com/wiki/Heli_Buton?oldid=299139"
Community content is available under CC-BY-SA unless otherwise noted.