"Kekeke! The first lesson a gentleman must learn in refinement is... Intruders are to die without a fuss!"
―Hellbat Schilt, Mega Man Zero 3

Hellbat Schilt (ヘルバット・シルト, Herubatto Shiruto), known as Devilbat Schilt in the North American version, is one of the bosses of Mega Man Zero 3, based on a bat that was originally created as a reconnaissance unit. He is one of the Eight Gentle Judges that was modified by Dr. Weil as one of Weil's Numbers. He doesn't get along with Blazin' Flizard and Childre Inarabitta. He is a gentleman and likes good manners, and considers Zero a barbarian trying to defy Weil. Zero has the mission to destroy a factory that was repairing weapons, and fights Schilt.

An image of Schilt appears in Mega Man Zero 4 as one of Dr. Weil's first form attacks, where Schilt releases electric spheres. He also appears as a secret boss in Area N of Mega Man ZX if a Mega Man Zero 3 cartridge is in the Nintendo DS or by activating the Zero 3 link in the Mega Man Zero/ZX Legacy Collection re-release.

During the battle, Hellbat Schilt warps randomly to another location of the room. 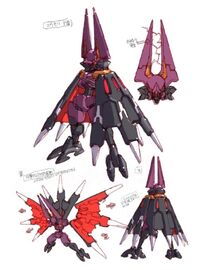 Concept art of Hellbat Schilt.
Add a photo to this gallery

Retrieved from "https://megaman.fandom.com/wiki/Hellbat_Schilt?oldid=329632"
Community content is available under CC-BY-SA unless otherwise noted.