4(All Range Attack, with Kuwagust)

Herculious is a Mutos Reploid based on the hercules beetle, and is a member of Sage Harpuia's Strong Air Battalion. Zero encounters Herculious at the end of the Neo Arcadia Shrine stage and again in the final stage. He uses electrical attacks and is vulnerable to ice attacks. 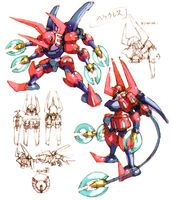 Herculious' early concept art.
Add a photo to this gallery

Retrieved from "https://megaman.fandom.com/wiki/Herculious_Anchus?oldid=293780"
Community content is available under CC-BY-SA unless otherwise noted.