"You truly did... have the soul of a hero... Go... Cross blades with Omega, and show what that body can do! Will your blade flinch after you learn the truth? Do you have what it takes... to be a hero? You must be the one to determine that!"
—Hidden Phantom, after being defeated by Zero, in Mega Man Zero 3

Hidden Phantom, or simply Phantom, is a character in the Mega Man Zero series. Phantom is the leader of the Cutting Shadow Squadron (斬影軍団 Zan'ei Gundan) with the title of Inshō Phantom (「隠将」ファントム, "Inshō" Fantomu, literally "Hidden General Phantom").[1] Phantom's schematics were based on that of X's capabilities of stealth. Phantom wields giant shuriken, named Dark Cross (闇十文字 Yami Jūmonji). He is one of Copy X's Four Guardians.

Like his siblings, Phantom's armor is based on that of his biological origin, X, with thematic alterations. Phantom's armor is colored black. His design is based on that of a ninja, having ninjutsu skills and making use of shuriken, kunai and katana to attack, as well as using illusions and substitutes to conceal himself. He is thus aptly named for his dark nature and ghostly movements. A white mask covers the upper half of his face, and he wears a red two-tailed cape on his back.

Phantom is the only member of the Four Guardians not to display an Armed Phenomenon form, having sacrificed himself in the first game before such transformations were revealed. Although he doesn't appear in Mega Man Zero 2, the Mega Man Zero Official Complete Works contains concept art which depicts Phantom's Armed Phenomenon form (which is a bat/wraith like form - see Gallery).

"Outdated one... You are not needed in the new world!"
—Hidden Phantom

Phantom has a calm, quiet demeanor. His major trait is his unwavering allegiance to his "Master X", displaying more loyalty than his three counterparts (none of whom were willing to sacrifice their lives in order to protect Copy X). Phantom has no mercy for those who oppose Neo Arcadia. His sacrifice may be considered admirable, despite the flawed nature of its cause.

In the Ciel's Memory drama tracks, Hidden Phantom is one of only two of the Four Guardians who is shown to be cautious of confronting the Resistance, or rather, Zero (the only other being Harpuia), even explicitly telling the others not to underestimate Zero, as he's their main enemy instead of the Resistance.

At some point, Phantom and the other three Guardians were cloned from X's DNA for the purpose of restoring the Earth from its polluted and devastated state after Maverick Wars and the Elf Wars. Although Fefnir, Harpuia, and Leviathan were given known purposes, including managing the clean up of the land, restoring atmospheric conditions to proper climates, the restoration of the seas, and to protect the last remnants of humans and Reploids, it is unknown what Phantom was purposed for. Upon X's disappearance, the four became the military generals of Neo Arcadia, responsible for the overall safely of its inhabitants, both humans and Reploids. Phantom became the leader of the Zan'ei Army, Neo Arcadia's stealth units and anti-Resistance intelligence unit.

Phantom's first appearance was to fight against Zero in a factory captured by the Resistance. Zero defeated him, but Phantom turned the tables when he informed Zero that he had planted bombs all over the factory. Zero found them and disposed of them, and later defeated Phantom's closest apprentice, Hanumachine.

When Phantom confronted Zero again in Neo Arcadia's Core, he was again defeated, but this time self-destructed in hopes that his explosion would harm Zero and protect his master. Zero escaped, however, and went on to defeat Copy X. After his death, Phantom's Cyber-elf entered the Cyberspace, where he would encounter Zero in his third adventure.

If Zero entered Cyberspace in the Sub Arcadia Level, a secret teleporter accessed by a certain door would appear that would lead him into a confrontation with Phantom. In Cyberspace, the world where all data is sent along with Reploids after death, Phantom learned all truths about the past. He claimed Zero never had the strength within him to be a hero. However, after being defeated by Zero, Phantom realized Zero's power and encouraged him to cross blades with Omega to prove himself once and for all.

After his battle with Zero, Phantom met up with Cyber-elf X, with whom he went to help the two guardians, Fefnir and Leviathan, who were reaching critical state from their battle with Omega earlier on in Mega Man Zero 3. X helped the two recover, as Zero started his battle with Omega, convincing them, and later Harpuia, to help Zero. Phantom didn't appear to help, due to his status as a Cyber-elf. The other Guardians were gone missing by Omega's explosion, but Zero was protected by the Dark Elf, who shielded him from the blast with her own body.

Neither Phantom nor the rest of the Four Guardians appeared in this game. Tech Kraken, however, is a pupil of his, and has joined the Einherjar Eight Warriors for an opportunity to avenge Phantom.

Phantom reappears in Mega Man ZX as the Biometal Model P. He is still fiercely loyal to X, who became Model X. When used by Vent or Aile, Models P and X combine to become the stealth-oriented Model PX. In Mega Man ZX Advent, Biometal P is used by Siarnaq.

As a Reploid clone of the original X, Phantom is an extremely powerful warrior in his own right. Having his design based around X's stealth capabilities, Phantom's fighting style and abilities revolve around various ninja-like arts, such as stealth, deception and misdirection which he combines with a matching set of tools such as smoke bombs, a katana-like blade and a large shuriken which can break apart into several kunai and serve as a flying platform. His EX skill makes the whole background dark and throw 4 kunai in different directions. Together with the fact that he has three health bars arguably makes Phantom one of the most difficult bosses in this game.

The only Guardian who never displayed this ability due to his untimely demise, a piece of concept art shows that Phantom is also capable of using the Armed Phenomenon to assume a more powerful form, in his case one of a large wraith/bat-like form. The concept art also shows that he is able to aim and fire the tips of his wings as giant blades and close his wings to assume a large, kunai-like form.

Some of Phantom's early concept art.

Phantom in the manga. 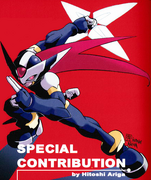