High Max, known as HI-MAX (ハイマックス, Hai Makkusu) in Japan, is an antagonist from Mega Man X6. Created by Gate from a piece of Zero's DNA, he acts as a false leader in the "investigation" of the Zero Nightmare, goading other Reploids into working with him. High Max is shown to be very arrogant and considers himself superior to both X and Zero in terms of specs. When they defeat him, he expresses surprise that they were able to do so.

By defeating High Max in a secret area hidden within one of the eight Investigator stages, Gate will challenge the Maverick Hunters directly, and the first Secret Laboratory stage will become accessible, even without having to defeat the remaining Mavericks, if any.

High Max will descend alternately from either the left or right side of the screen. He will ascend and change his position each time he is damaged or when he finishes an attack. When first encountered, he is practically invincible and X must simply outlast him. When encountered again, whether in the secret areas (after Zero is unlocked) or in Gate's Lab, the player must get creative to defeat him. X should stun him with charged X-Buster, then use any special weapon to damage him. Even though Magma Blade is considered his weakness, any one of them is effective damage wise, with Metal Anchor recommended for its firing angle that can hit from diagonally below to damage him. The Shadow Armor's charged attack is also effective against him, and High Max also takes considerable damage from said armor's Giga Attack; likewise, the Ultimate Armor's Nova Strike is also highly damaging. Zero should do the exact reverse of this strategy — use Shouenzan or any other special move to stun him, followed by regular Z-Saber strikes. During the final confrontation, High Max will immediately surround himself with two destructible rectangular shields. His new attack patterns include:

(A purple phantom Zero appears, finishes off the Mechaniloid and then vanishes.)

X: What! Did you say the Zero Nightmare?

High Max: What are you trying to do? What is your connection to the Zero Nightmare?

X: What about Zero? You are behind this!

High Max: You are dangerous... I'll dispose of you.

High Max: Maverick Hunter... Not amazing. We will destroy the Zero Nightmare. You are not wanted here. Keep out.

After Defeating High Max in a Secret Area

High Max: No! I can't believe this. I'm superior to him in every respect, the speed, the power and the body... An old robot like you can't beat me... This can't be true!!

Isoc: You ancient piece of junk, it's not over! I'll destroy you myself! For the time being, farewell!

Signas: X! Cool down! We don't want to lose you. You may be damaged in the battle. Return to the Hunter Base, now!

High Max: Data-wise, I've surpassed you... There's no chance for me to lose!

X: Are you still babbling about things like that? I just have to win!

Zero: What is he saying? Anyway, it's time to finish!

High Max after his defeat. 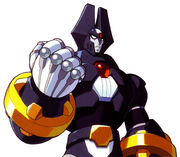 High Max's mugshot.
Add a photo to this gallery

Retrieved from "https://megaman.fandom.com/wiki/High_Max?oldid=219022"
Community content is available under CC-BY-SA unless otherwise noted.