Homing Torpedo (ホーミングトーピード, Hōmingu Tōpīdo) is the Special Weapon that X obtains from defeating Launch Octopus in Mega Man X and Mega Man Maverick Hunter X. When equipped, X fires a small missile that seeks out the nearest enemy. If there or no enemies nearby, the weapon will simply fly in a straight line. Despite its "torpedo" moniker, it can be used both in and out of water, much like the amphibious Dive Missile from the original series. Up to two Homing Torpedoes can be fired and be visible on the screen at a time (three in Maverick Hunter X). When fully charged, X will fire four (six in MHX) quick piranha/angelfish-like missiles; along with having increased firepower, these torpedoes boast a more fluid mobility and faster traveling speed that grants its homing capabilities with a higher degree of accuracy onto nearby targets than if uncharged, and is useful when faced with numbers of enemies.

This weapon is Boomer Kuwanger's weakness. Vile is also susceptible to the Homing Torpedo as well.

The uncharged version of Homing Torpedo featured as X's second active skill in Rockman X DiVE with its Maverick Hunter X design, where it is named Tracking missile (追蹤飛彈, Tracking missile) in English and Chinese and Homing Missile (ホーミングミサイル, Homing Missile) in Japanese. X can fire up to two missiles, having a cooldown period to recharge after use. It has three skill cards available, but only one can be equipped to improve it:

Tracking Missile is one of X's skills. When used, X charges energy and releases a giant homing missile that explodes on impact and causes heavy Light attribute damage to the target and surrounding enemies. It has a chance of temporarily stopping targets. 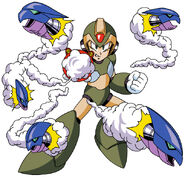 Mega Man X firing a Homing Torpedo that is homing in on an Amenhopper.