Hotarion (ホタリオン, Hotarion) is a nighttime security Mechaniloid that can fly at high speed while shining. It was designed after an endangered firefly species.[1] Maverick Hotarions appear as enemies in Spark Mandrill's stage in Mega Man X. When entering the darkened areas of the stage, this robot will fly across, oftentimes too fast to dodge. Beware, it can knock you into pits. However, it lights up the path it flies through, making it both help and harm. In Mega Man Maverick Hunter X, this enemy reappears right before X fights Spark Mandrill for the last time in Sigma Palace.

A different Hotarion firefly appears in Mega Man X5 in Shining Firefly's stage and the last Zero Space stage. It has two varieties of attack: one will materialize and fly in the direction of the player, and other will float high while making a wall of lasers. It's also the firefly that appears with the Flash Laser. 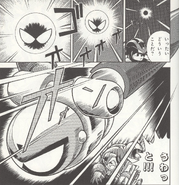 Retrieved from "https://megaman.fandom.com/wiki/Hotarion?oldid=307090"
Community content is available under CC-BY-SA unless otherwise noted.