Reina Ueda
iCO (アイコ, Aiko) is a character in Mega Man X DiVE, acting as both a playable character and the navigator. She is the commander of the Irregular data that have been appearing in the Deep Log, and is the split half of RiCO. She berates ViA for keeping her split half and Player in the dark about her existence and the fate that she - along with ViA and RiCO - will meet when all the Irregular data is corrected, but acknowledges the player for their strength, admitting that ViA did pick the right person for the mission.

iCO has a similar appearance to RiCO, but with a few differences.[2] Whereas RiCO's has blue hair and has a side ponytail, iCO's hair is white with a little light blue stripe on the back of her hair and keeps her hair long. iCO's eyes are also rather hollow compared to RiCO's, with the only sign of black in iCO's eyes being two tiny dots as her pupils.

Her outfit is black leotard with red stripes, with the upper half of it covered up by a white business-like outfit (it doesn't cover her full upper body compared to RiCO's) with a rose red tie held by a pink tourmaline gem. She also has a red zigzag stripe on the right side of her face and wings on her back that allow her to fly.[3]

iCO first appears in Mega Man X DiVE after ViA trains RiCO in the Deep Log, with ViA not wanting iCO to make her move yet as he wants to analyze the player some more. She accepts on the condition that it won't create any more work for her. Throughout the story, she decides to test the player's strength by sending Bass and upgraded versions of Dr. Doppler's Nightmare Police after the player, while also claiming to be the real RiCO. After defeating the upgraded Byte in Chapter 15, she tells the player that their next meeting will be a shocking one. In Chapter 16 (which takes place in the Den Area from Mega Man Network Transmission), she shows her face to RiCO for the first time.

She criticizes ViA for explaining too little of the player's mission to them and for concealing her existence before going off to correct some more irregular data. In the boss level of Chapter 16, iCO then appears alongside Godkarmachine O Inary, the combined form of Bit and Byte. She then reveals that not only was she the one who brought Godkarmachine O Inary to the Den Area, but also reveals that she was also the one who upgraded the Nightmare Police at the cost of corroding their bodies and souls. After the player defeats the combined Nightmare Police, iCO - along with RiCO - congratulates the player for defeating the combined Bit and Byte, complimenting the player's strength and telling ViA that he picked the right person for the mission.

iCO then reveals to the player that she, RiCO, and ViA are all similar to Irregular data, and that the three of them will be erased from existence once the player's mission is complete, which leaves RiCO in sadness and denial. After being scolded by iCO once again, ViA apologizes to RiCO and the player that he kept them in the dark for too long, but he didn't want "them" to find out about his and iCO's plans. The two leave, but not before iCO tells RiCO that as long as they - along with ViA - exist within the Mega Man universe, RiCO is the one that can bring iCO and ViA into it.

iCO is an S rank Hunter Program exclusive to the DiVE Festival. Her Active Skills are Data Reconstruction and Analyzer Wall. Data Reconstruction summons an information field for 12 seconds that randomly releases three boss abilities from the Deep Log: The Shooting Claw attack from Bass GS, the purple cube from Final Sigma W, and the snare from Dr. Weil's second form. Analyzer Wall creates a force field that causes damage to enemies within range and protects iCO from damage. 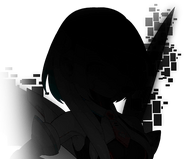 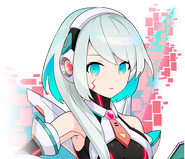 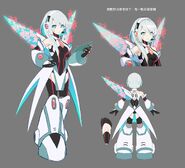